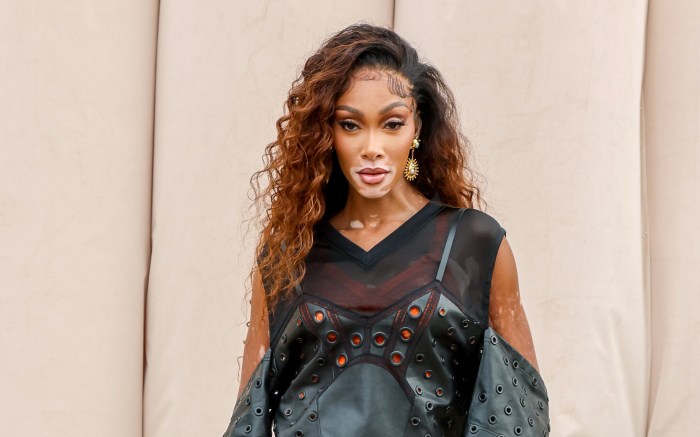 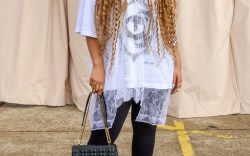 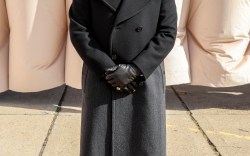 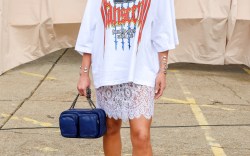 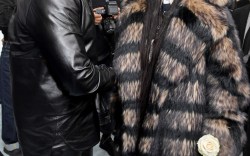 Harlow, ready to celebrate Burberry’s highly anticipated show, was clad in a head-to-toe look from the brand. Harlow’s look included a black strapped dress with a sheer neckline and grommet on the sleeves, bodice, and side panels. Underneath the dress was an orange bodysuit with a lace bra, giving the look some pop of color. Her footwear quite literally soared to new heights with a pair of thigh-high round-toe Burberry boots in black leather.

She accessorized the look with a black quilted crossbody bag with the TB logo as the lock and the gold chain strap. She also wore a pair of gold statement earrings with a chandelier sun design silhouette and pearl embellishments.

For beauty, the model went for an arched eyebrow with a dramatic smokey eye and mascara. Her lips had a glossy look with a hint of lip liner for a statement-making pout. She did her hair in large wavy curls, parting her hair to the left side.

Harlow was seen on the front row posing next to her pal, singer and dancer Normani, who wore a black and white checkered and striped look from the brand. Harlow has been making her rounds at Fashion Month. During New York Fashion Week, she walked the runway for Tommy Hilfiger, LaQuan Smith, and Puma.

This summer, Harlow also starred as one of the faces of Puma’s “Forever Luxe” collection. Harlow has been a longtime ambassador for Puma and has starred in many of the brand’s ad campaigns. She’s also been a longtime fan of Riccardo Tisci and Burberry, having previously attended the designer’s show for the brand in February 2020.

Originally planned for Sept. 17, Burberry made the conscious decision to postpone its runway show due to the passing of Queen Elizabeth II. Instead, they showed on Sept. 26.