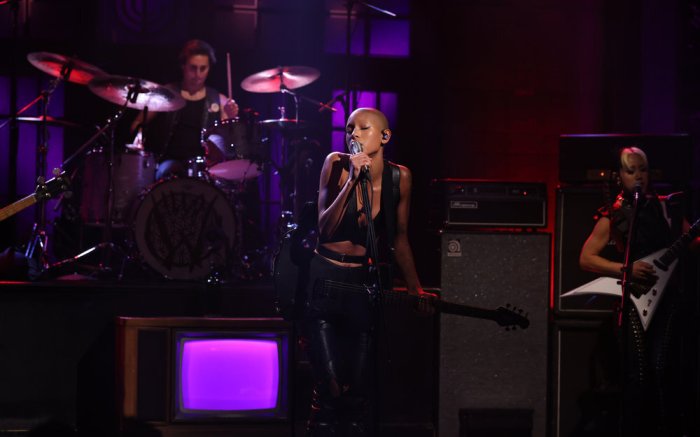 Willow Smith brought edgy style to Saturday Night Live‘s stage at NBC Studios in New York City, on Oct. 8. The 21-year-old singer matched her dark guitar in an all-black ensemble to sing “Ur a Stranger” from her newest album, “Coping Mechanism.”

Smith wore a leather wrap top with a black buckle by Alaïa, paired with fitted leather pants with a hold-over waist and a black belt. The signer accessorized minimally with silver hoops and a septum ring.

The standout piece of her outfit was her shoes. Smith slipped into knee-high combat boots. The punk rock-style boots featured buckles that went all the way up the side of the shoe. Classically made of black leather, combat boots were adopted by counterculture movements in the 1980s and 1990s, like the goth, punk, grunge and heavy metal scenes.

Smith released her rock album earlier this month on Oct. 7 with songs about the rise and fall of a relationship. The singer redefined her singing career back in 2021 when she returned to music with an indie-rock style album, “lately I feel EVERYTHING”.

On “SNL,” Smith joined Brendon Gleeson as he hosted the second episode of Season 48 of “SNL”.

The ‘Ur A Stranger’ singer stays true to her signature grunge style at all times. Smith is usually seen in oversized t-shirts with baggy jeans. Her go-to footwear ranges from casual Vans to edgy platform combat boots. When she’s making a red carpet appearance, the singer will slip into pointed-toe pumps and pair it with a unique dress. Her shoe closet is filled with casual styles like Nike and Converse sneakers and luxury brands like Christian Louboutin.