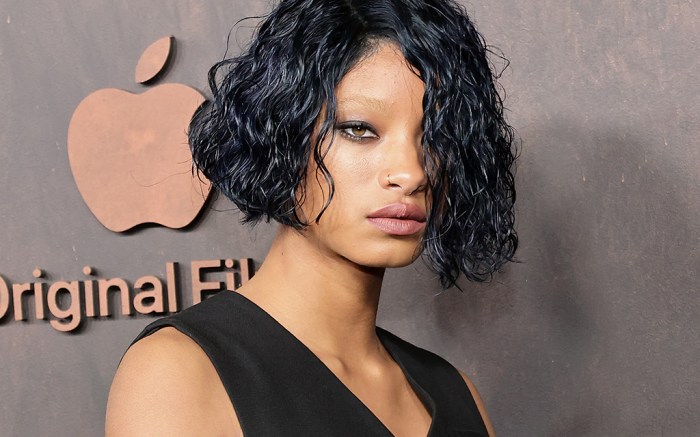 Willow Smith served up glamorous fashion for Mugler‘s “Alien Goddess Intense” perfume campaign. An image of Smith, which was posted to Mugler’s Instagram account yesterday, saw the star sprawled out in a Mugler bodysuit and open-toed boots, posing next to an enlarged perfume bottle.

Smith’s bodysuit was a black bodycon style featuring matte black paneling that gave way to angular cutouts, a miniskirt, and wide and thin mate stripes that wrapped around her arms and up her hands.

The ensemble was completed with chrome stiletto-style nails and an edgy black winged liner.

When it came down to footwear, Smith modeled black square-toe sandals featuring metallic soles and heels reaching at least 3 inches. The shoes were paired with black cutout stockings.

When it comes to fashion, the “Purge” singer tends to gravitate towards easy styles that have a casual flair. For footwear, Smith opts for sleek and edgy pieces to match her eclectic style sense. She can be seen on the red carpet in pointed-toe pumps, ankle boots and buckled sandals, hailing from brands such as Christian Louboutin, Balmain, and Louis Vuitton. Off-duty, her ensembles tend to feature Chanel combat boots, as well as Nike and Converse sneakers.