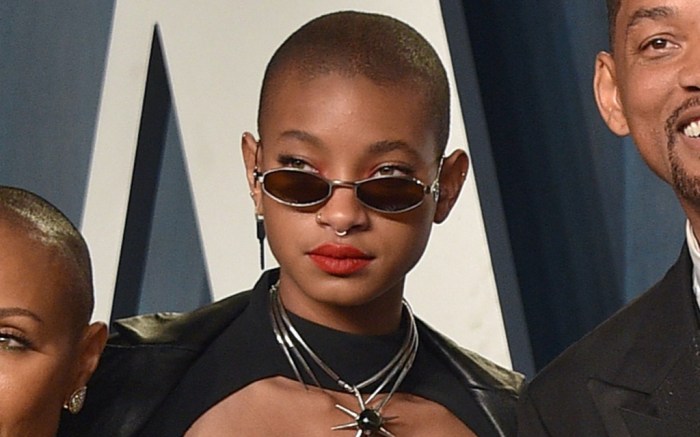 In a teaser video posted to Instagram on Sept. 2, Willow Smith, Jada Pinkett Smith, and Jada’s mother Adrienne Banfield-Norris of “Red Table Talk” gathered around while the sound of someone knocking to a beat played in the background. The mysterious knocking was coming from former Nickelodeon child star Jennette McCurdy who will appear in Wednesday’s newest episode in order to discuss her traumatic time on “iCarly” and the abuse she suffered under her now deceased mother which she detailed in her new novel “I’m Glad My Mom Died.”

The promotional clip saw Willow wearing a Y2K-inspired dark red two piece velour sweat set which featured a long sleeve cropped zip-up hoodie that was paired with slouchy sweat pants. The “Meet Me At Our Spot” songstress accessorized with a whimsical beaded necklace and nothing more, keeping the ensemble simple.

When it came down to footwear, Willow wanted something just as cozy as her sweat set, the star opting for fuzzy cheetah printed brown and tan Ugg boots. The footwear has become an iconic part of popular culture thanks to it’s all-around comfort and versatility no matter the style.

These animal print Ugg boots are a perfect addition to this very 2000s ensemble given that both the sweatsuits and the polarizing footwear were popularized around the same time period.

The singer can usually be found wearing grungy styles of shoes like platform combat boots or creepers. Smith has also taken a liking to high-top Converse.