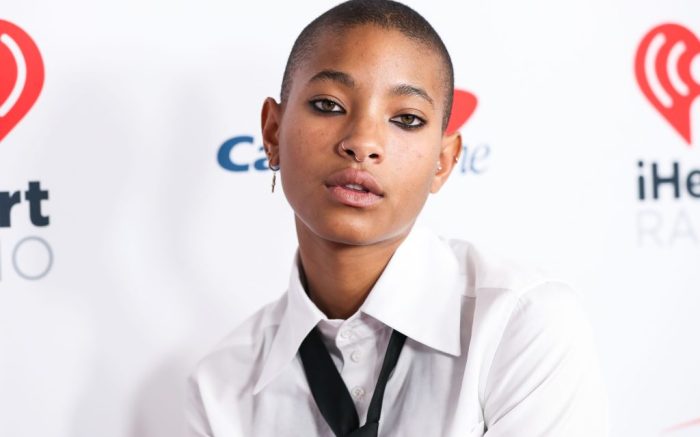 Willow Smith brought a punk rock edge to schoolgirl style at the iHeartRadio ALTer EGO 2022 concert at The Forum in Los Angeles.

The “Wait a Minute!” singer posed on the red carpet, flashing peace signs in an edgy take on prep school uniforms. Smith wore a black pleated miniskirt from Miaou’s Spring 2022 collection, paired with a white collared shirt and a black tie. The star continued her edgy streak with a pair of white leggings, covered in tattoo-like drawings. Her punky look was complete with black leg warmers.

When it came to shoes, the “Lately I Feel Everything” musician completed her look’s rebellious nature with a pair of black combat boots. The style featured a lace-up silhouette, as well as thick rubber soles with top-stitching accents and what appeared to be leather uppers. As the ultimate rock ‘n’ roll shoe, the style instantly gave Smith’s outfit a purely nonchalant nature.

Combat boots have become one of the most popular styles this season for a grungy and utilitarian look. Many often come accented with buckles, chains and grommets for added edge. In recent weeks, stars including Olivia Rodrigo, Bella Thorne and Kourtney Kardashian have also been spotted in similar lace-up pairs by Dr. Martens, Miu Miu and Prada.

For footwear, Smith opts for sleek and edgy styles to match her eclectic aesthetic. The “PrettyGirlz” singer can be seen on the red carpet in pointed-toe pumps, ankle boots and buckled sandals, hailing from brands such as Christian Louboutin, Balmain and Louis Vuitton. Off-duty, her ensembles tend to feature Chanel combat boots, as well as Nike and Converse sneakers.

In addition to wearing stylish shoes, Smith has cemented herself as a fashion world fixture. The musician can be seen in the front rows of Fashion Month shows for top brands including Vuitton, Dior and Michael Kors. She’s also served as a campaign star and ambassador for numerous brands, including Chanel, Onitsuka Tiger, Stuart Weitzman and Marc Jacobs.

Prep for combat this winter in edgy boots.

Click through the gallery to see Smith star in the Fall ’20 campaign for Onitsuka Tiger.