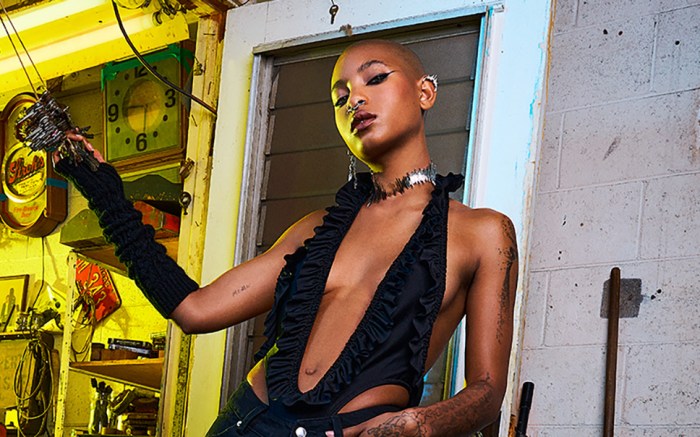 After rising to fame as a 9-year-old with her smash hit “Whip My Hair,” the daughter of Will and Jada Pinkett Smith has forged her own path as an entertainer and actress. As the release of her new album “CopingMechanism” nears, Willow reflects on her journey, success and the future.

Willow posed in an array of grungy looks throughout the magazine. The “Lipstick” singer cut a stylish figure in a monochromatic ensemble. Her outfit consisted of a black ruffled top that had a plunging deep V-neckline and cutouts on the hip. She teamed the risky piece with baggy oversized shorts. For accessories, she went with a metal choker and one knitted opera glove. She completed the look with slouchy thigh-high boots.

Another photo sees “The Lorax” actress in a plaid blazer that was decorated with splashes of paint. Willow wore the staple outerwear with a white button-down shirt that she wore as a dress. She continued to amp up the menswear-inspired set with a black tie, silver chain and one dangling earrings. The entertainer rounded out the look with knee-high combat boots. The silhouette was adorned with studs and was set on a stacked round heel.

Within her interview with Billboard, Willow gave her fans a taste of what they can expect from her new album, “Copingmechanism.” “I wanted to go for the heart of rock music, which to me is a deep outcry — maybe about pain, maybe about joy.”

She also opened up about the media firestorm that erupted after father Will Smith slapped Chris Rock at the Oscars. “Didn’t rock me as much as my own internal demons. I see my whole family as being human and I love and accept them for all their humanness. Because of the position that we’re in, our humanness sometimes isn’t accepted, and we’re expected to act in a way that isn’t conducive to a healthy human life and isn’t conducive to being honest,” Willow explained.