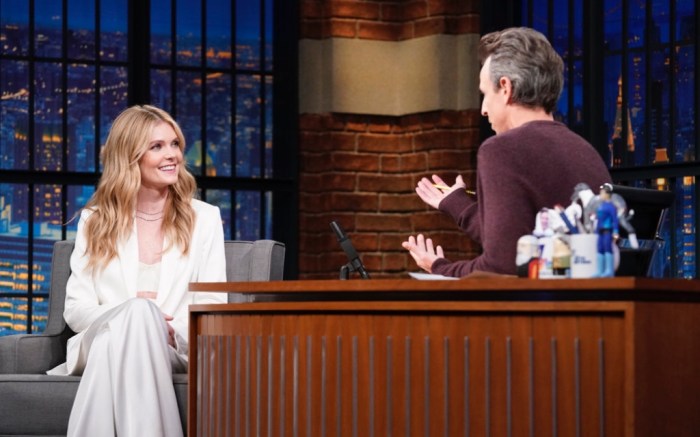 Meghann Fahy hit the late-night circuit in a crisp look.

The “White Lotus” star appeared as a guest on “Late Night with Seth Meyers” on Wednesday night. While on the show, Fahy talked about her role on the popular HBO series, getting lost while filming with Aubrey Plaza and how her dentist saved her tooth after she broke it.

For her television appearance, Fahy wore a white oversized blazer with matching wide-leg baggy pants, both from Galvan London. Under her jacket, she wore a white bra top. The actress accessorized with layered necklaces.

When it came to her footwear, “The Bold Type” alum added serious height. She wore a pair of white platform sandals by Christian Louboutin. Her strappy heels featured a thick sole, and a towering block heel reaching at least 5 inches in height. The platform shoe trend is one of the easiest styles to incorporate into any wardrobe. Post-pandemic, platform shoes have emerged as one of the most popular footwear styles.

“The White Lotus” is an American comedy-drama anthology television series created by Mike White. The program follows the guests and employees of the fictional White Lotus resort chain, whose stay becomes affected by exploits and misadventures over a week-long period. The second season stars Aubrey Plaza, Jennifer Coolidge, Theo James and many more. This season premiered on Sunday, Oct. 30 on HBO, and is also available to stream on HBO Max. The season consists of seven episodes, with the finale premiering on Sunday night.