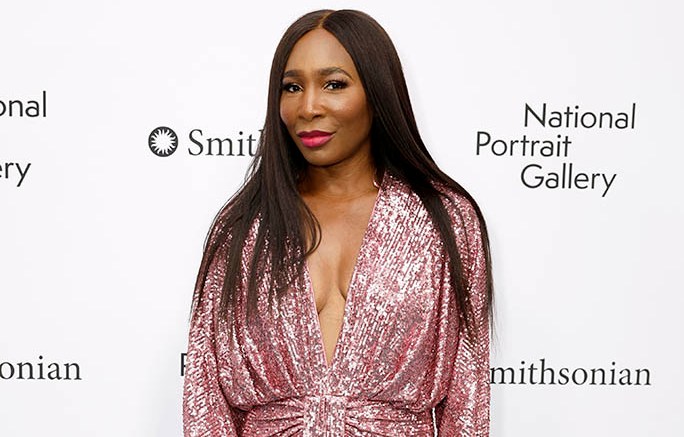 The Smithsonian’s National Portrait Gallery and its Director Kim Sajet welcomed some of the biggest entertainers and luminaries from across the country to Washington for the 2022 Portrait of a Nation Gala on Nov. 12.

Venus Williams stepped out in sparkling style for the star-studded affair. The Olympic tennis star joined her sister Serena Williams at the event as she received the museum’s Portrait of a Nation Award for her wide-ranging transformative contributions to the United States and its citizens.

Venus shined on the turquoise carpet, wearing a pink sequin gown. The garment had a plunging deep V-neckline with ruched detailing on the bodice. The 42-year-old athlete parted her hair in the middle and styled it straight. For a bold pop of color, she added a vibrant magenta-pink lip.

Completing Venus’ look was a pair of brown T-strap sandals. The silhouette had a sequin studded T-strap at the center as well a round chocolate brown outsole. The flat style kept the look fairly casual while still looking polished.

When it comes to footwear, the Grand Slam Cup winner tends to gravitate towards sharp styles with an edge. Some of her favorite silhouettes are sandals, boots and pumps embellished with crystals, studs or metallic tones from brands like Christian Louboutin, Prada and Jimmy Choo. Her off-duty looks will likely include sleek sneakers by Nike and New Balance.

Along with her personal style, Williams has made a name for herself in the fashion industry with her activewear brand, EleVen by Venus Williams. She’s also collaborated with Diane von Furstenberg and Ralph Lauren over the years, as well as launched several capsule collections with K-Swiss.