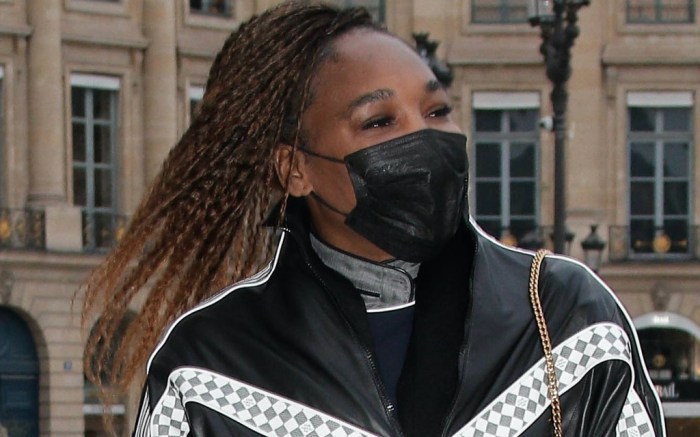 When it came to shoes, Williams looked perfectly at home with French girl style in a pair of black Chanel boots. The calf-high pair featured rounded leather capped toes, as well as ridged soles and block heels totaling at least 2 inches in height. The style was finished with Chanel’s delicate gold “double C” logo, adding an elegant touch to the edgy and versatile pair. Williams’ boots created a full monochromatic moment, while proving she could give a chic dimension to her edgy style.

Chic boots like Williams’ are a year-round trend, particularly in the winter and fall seasons. Providing fuller coverage than heels or sandals but proving equally versatile, many pairs feature black or brown uppers in leather and suede textures. In addition to the 2021 FN covergirl, stars like Olivia Culpo, Emily Alyn Lind and Chiara Ferragni have also worn stylish boots by Nomasei, Dior and Nodaleto in recent weeks.

For footwear, Williams often opts for sharp styles with an edge. The Grand Slam Cup winner prefers sandals, boots and pumps embellished with crystals, studs or metallic tones from brands like Christian Louboutin, Prada and Jimmy Choo. Her off-duty looks have featured sleek sneakers by Nike and New Balance, as well.

Aside from being a front-row star at Fashion Month, Williams is a designer in her own right, having designed her Eleven by Venus Williams apparel brand since 2007. She’s also collaborated with Diane von Furstenberg and Ralph Lauren over the years, as well as launched several capsule collections with K-Swiss.

Add edge to your wardrobe with black boots.