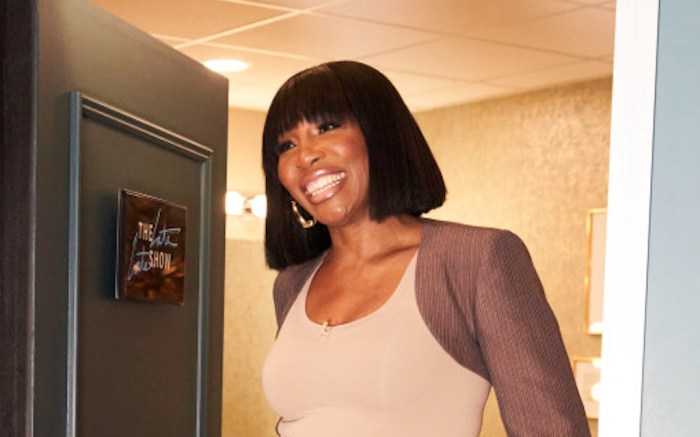 The four-time Olympic gold medalist was on Monday night’s episode of “The Late Late Show With James Corden” in Los Angeles, where she talked about the success of her biopic film, “King Richard,” which depicted her childhood and growing up to become a powerhouse in tennis under the guidance of her father Richard Williams, played Will Smith, who earned a Best Actor Oscar nomination for his performance.  She also answered questions about the awards show season for the film.

The other guest of the night was Zach Braff, who was there to promote his new movie “Cheaper by the Dozen” and how he got in shape to play Gabrielle Union’s husband in the film.

For the outfit, Williams chose to wear a brown pantsuit that had eye-catching construction. The jacket was cropped and fit right under her arms paired with a beige top that added contrast to her dark suiting. And on the lower half, her trousers were loose-fitting with a high-waist design and cropped for a modern touch.


To complete everything, Williams went with a pair of tiger-striped platform sandals by Sophia Webster. The brand’s Natalia shoes had a peep-toe, satin upper and a purple and pink stacked beaded heel constructed from multiple small balls, which added a colorful element. The heels had a height of approximately 4 inches and had a matching ankle strap for maximum security. They retail for $695.

When it comes to clothing, Williams tends to opt for modern and chic options. For example, she recently wore a gray tweed coat, crop top, high-waisted jeans and cap-toe heels for Chanel’s Fall 2022 show.

Williams has also continued to pioneer her own lane within the fashion industry. She recently became the new global brand ambassador of Lacoste, and she also collaborated with K-Swiss in 2020 on a line of clothing and sneakers that had sport and sleekness in mind. The tennis star also has her own apparel line, EleVen by Venus Williams, which focuses on creating clothing with functionality at the forefront.

Click through the gallery to see Williams’ best street style looks over the years.