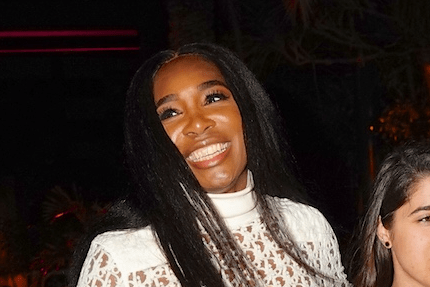 Venus Williams puts her own spin on a classic color scheme.

The four-time Olympic gold medalist was spotted arriving at Carbone Beach in Miami Beach, Fla. last night while wearing a chic look suitable for the festivities.

For the outfit, Williams donned a sheer white long-sleeve top from Dior that had the brand’s signature Trotter print displays all over it. The garment also had a turtleneck design for a modern yet cozy finish. On the lower half, she went with a black leather miniskirt that had a bedazzled pendant on the front and incorporated a sleek wrap design.

Williams finished off her look with a pair of crystallized black sandals. The shoes featured a thong silhouette that added a modern yet effortless touch to her ensemble.

Thong sandals feature a piece of material between the first and second toes that acts as a source of security for the entire front of the shoe. Thong sandals can either have an open back or feature an ankle-encircling strap for support. Flip-flops are the most popular type of thong sandal, however, some elevated styles have stiletto heels.

Williams is one of the most fashion-forward tennis players to ever compete in the game, and she fosters that status quo both on the court and on her Instagram feed alike. In her younger years, she wore her signature clear and white hair beads that added her personal flair to her tresses while she played and later on in her career, she became known for her edgy court aesthetic in the form of lace bodysuits, tulle skirts and crisscross designs. In recent years, Williams has posted her eccentric personal style and her affinity for brands including Chanel and Burberry. While along the lines of shoes, Williams pops on boots, pumps, sandals and sneakers from labels such as Louis Vuitton and Prada that ground her getups.

Click through the gallery to see Williams’ best street style looks over the years.

Put on a pair of thong sandals for a breezy finish.