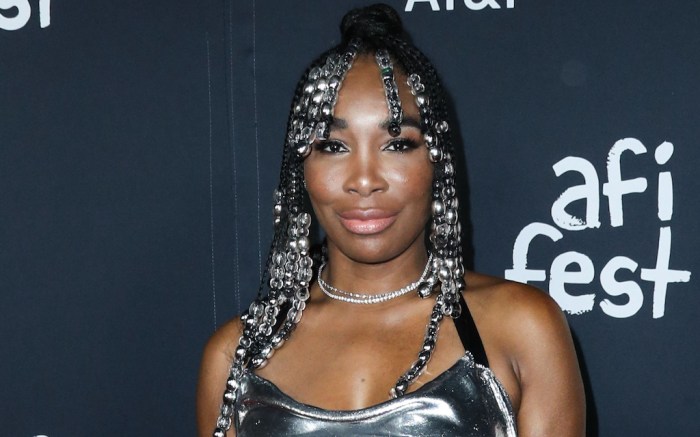 Venus Williams works out in style.

The four-time Olympic gold medalist posted a video on Instagram yesterday, where she showed off some exercises for arm day and talked about how to stay committed to your fitness goals for 2022. When it comes to the ensemble, Williams donned a black sports bra and black stretch pants that helped to streamline her outfit. She accessorized the athletic vibe with a black cap that featured the emblem from her clothing line, Eleven by Serena Williams.

For the shoes, Williams opted for a pair of white sneakers that incorporated a round toe for a relaxed look.

Williams is one of the most fashion-forward tennis players to ever compete in the game, and she fosters that status quo both on the court and on her Instagram feed alike. In her younger years, she wore her signature clear and white hair beads that added her personal flair to her tresses while she played and later on in her career, she became known for her edgy court aesthetic in the form of lace bodysuits, tulle skirts and crisscross designs. In recent years, Williams has posted her eccentric personal style and her affinity for brands like Chanel and Burberry. While along the lines of shoes, Williams pops on boots, pumps, sandals and sneakers from labels like Louis Vuitton and Prada that ground her getups.

Williams has also created her own ventures within the fashion industry and has, as previously mentioned, created her own clothing line entitled Eleven by Venus Williams, where she creates sports bras, tank tops, hoodies, skirts and dresses that have a functional twist. Recently, she starred in a Stitch Fix campaign while wearing K-Swiss sneakers.

Flip through the gallery see Williams’ best street style looks over the years.