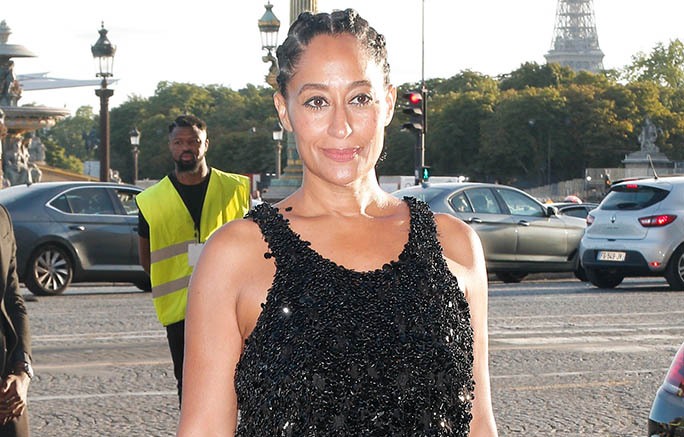 After getting the first look at Balenciaga’s Haute Couture presentation during Paris Fashion Week, which Naomi Campbell, Kim Kardashian, Dua Lipa, Nicole Kidman and Bella Hadid all walked in. Tracee Ellis Ross pulled out another head-turning outfit for the luxury label’s exclusive afterparty. In the last few years, Balenciaga’s artistic director Demna has carefully curated an ongoing dinner party of celebrity brand ambassadors as an essential part of the brand’s populist world-building.

Ross made a sparkling statement as she arrived at the venue in Paris. The “Girlfriend” actress posed for photos in a sequin jumpsuit that included beaded and fringe details throughout. The one-piece garment was complete with wide straps, a scoop neckline and slightly flared leg. Her look gave the illusion of a top due to the fitted band at the waist.

To let her look speak for itself, she opted for minimal accessories and neutral makeup. She carried her must-have items in a black leather top handle bag. Her signature curly tresses were styled in cornrows.

The length of her pants leg allowed for a peak at her footwear, which appeared to be a pointy silhouette. When it comes to footwear, the five-time Emmy Award winner favors pumps, sandals and boots from labels like Versace, Andrea Wazen and Gucci. When she’s not in heels, the entertainer keeps it cozy in various sneaker silhouettes.