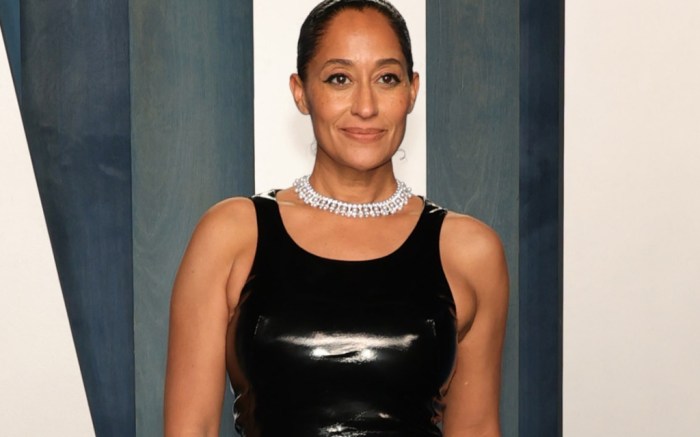 Tracee Ellis Ross is taking a futuristic approach to fall fashion. The “Black-ish” star left her Instagram followers shook after she uploaded a series of photos.

“It was a future party,” Ross wrote under the photo.

The carousel-style post sees Ross posing in the corner of a room. The award-winning entertainer served up some serious monochromatic style inspiration as she poses in a black nylon jumpsuit. The one-piece garment had a turtleneck and long fitted sleeves. The garment also featured built-in boots. The pantaboots had an elongated toe and curved heel.

Pant-boots, or boot-pants have become the go-to all-in-one bottoms of celebrities who have committed to the bit. Kim Kardashian and Julia Fox are both frequent wearers. The hybrid piece initially made its debut during Balenciaga’s Spring 2017 ready-to-wear collection and immediately sold out after officially releasing in January.

Taking things up a notch, the Pattern founder added a leather bomber jacket, black gloves, oversized statement earrings, silver Balenciaga shades and Balenciaga’s Hourglass XS handbag. The glittery purse was the perfect choice as it gave her look a glamorous touch. For glam, the “Girlfriends” actress went with her signature bold red lip and slicked her curly tresses back into a low bun.

Ross always gives a masterclass in style. Her shoe wardrobe is just as impressive, ranging from pumps to sandals and boots from labels like Versace, Andrea Wazen and Gucci, among other top brands. When she’s not in heels, the entertainer will likely complete her looks with a variety of sneaker silhouettes. She always offers sneaker outfit inspiration by proving that classic kicks can be styled several different ways.

PHOTOS: Click through the gallery to discover Ross’ best red carpet looks over the years.