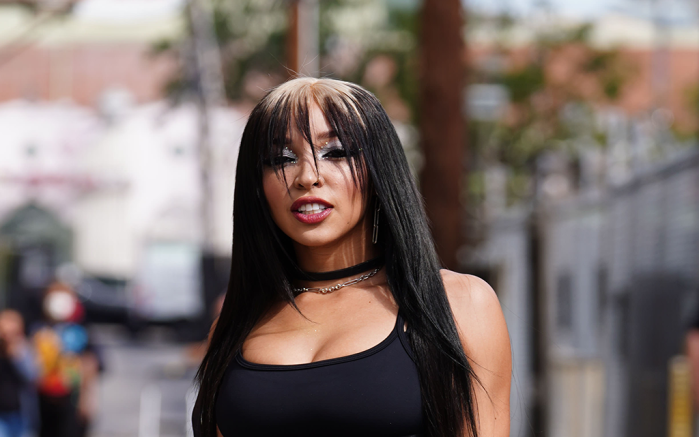 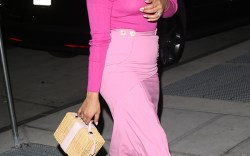 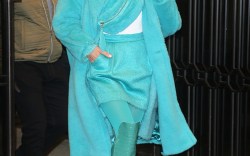 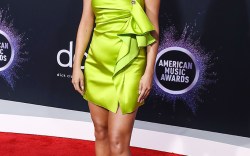 Tinashe knows how to make an edgy statement during high-profile appearances. The “2 On” singer was spotted while arriving at the “Jimmy Kimmel Live!” set in LA on Tuesday in an eye-catching look.

Tinashe went with a “Tomb Raider”-inspired outfit that included a black bralette with a plunging neckline. On the lower half, she wore black underwear that matched. She also threw on a pair of black fishnets for a chic touch.

She elected to wear a black choker and a silver necklace for an extra glimmer. Her outfit, which nodded style elements from the hit action movie starring Angelina Jolie, also encompassed a black leather garter belt that featured black leather straps and silver buckles and hardware that added that solidified her vibe. The “Slumber Party” singer also wore a pair of black leather fingerless gloves. As for her tresses, she went with a unique presentation opting for blond roots and black ends for a dramatic finish.

To complete everything, she slipped on a pair of tall black leather boots that unified her attire. The shoes had a rounded toe and slick uppers that shone in the light.

The “Bouncin” singer has a trendy sartorial aesthetic that showcases her versatility. For example, recently, she wore a sheer dress, leather bra and platform Mary Janes for Justin Bieber’s concert after-party for a sleek appearance.

Tinashe has also strived to make a name for herself within the fashion industry, having starred in campaigns for brands like Juicy Couture and John Frieda Hair Care. She has even collaborated on a shoe collection with ShoeDazzle.

Pop on a pair of tall black leather boots for a refined look.