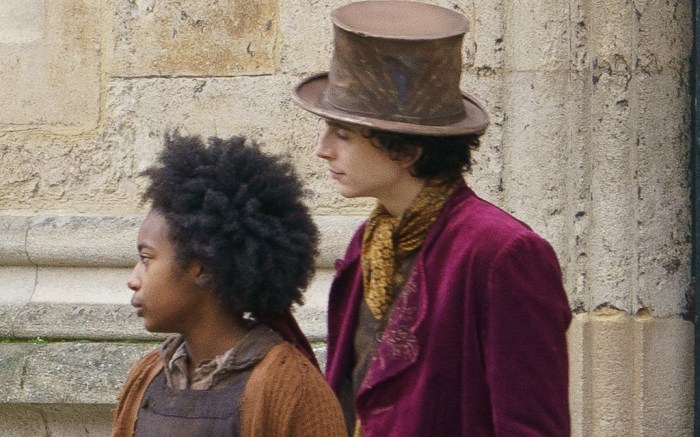 Timothee Chalamet proved that even in character, he can still pull off a sharp boot.

While filming “Wonka” in Oxford, London, Chalamet was dressed in character as the titular Willy Wonka. For the occasion, he wore a purple velvet coat with sharp shoulders. The bold outerwear was layered over a brown scarf and striped brown trousers. His look was complete with a wooden cane—plus Wonka’s signature brown top hat.

For footwear, the “Dune” star laced into a pair of brown leather boots. The paneled style featured rounded toes, as well as flat heels to fit into the movie’s vintage aesthetic. The footwear completed his costume with a classic but archival appearance, ideal for the Willy Wonka origin film.

Chalamet is a fashion chameleon, often wearing looks that feature streamlined silhouettes and monochrome styling with bursts of prints, colors and textures. The “Beautiful Boy” actor makes statements in bold looks from top labels like Stella McCartney, Alexander McQueen, Prada, and Haider Ackermann — to name just a few — as well as cult-favorite brands like Sterling Ruby. Chalamet’s bold style has made him a fixture on the fashion scene; he was even a co-chair of the 2021 Met Gala last fall.

When it comes to shoes, rocking a sleek boot on the red carpet is one of Chalamet’s signature styling moves. Glossy Chelsea and zip-up pairs with sharp toes are his most frequent go-to’s from high-end brands like Berluti, Saint Laurent and Celine. When off-duty, Chalamet regularly slips into versatile white and grey sneakers. New Balance is one of the star’s favorites — he’s even worn limited-edition styled by the brand’s collaborations with Staud and Jaden Smith. Outside of those, he’s also been spotted in pairs by Louis Vuitton, Vans, and Off-White — plus affordable Tretorn kicks that retail for under $40.

Click through the gallery for Chalamet’s boldest style moments over the years.