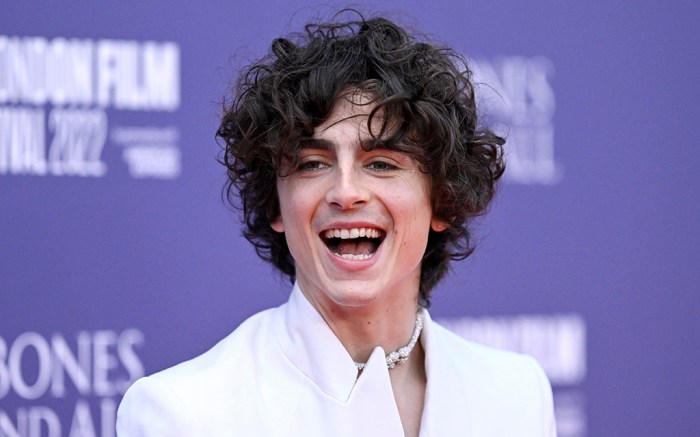 Sporting sunglasses, Timothée Chalamet cooly joined his co-stars on the purple carpet today. The actor was on hand for the London premiere of his latest film “Bones and All” during the 66th BFI London Film Festival at The Royal Festival Hall.

Dressed in white from head to toe, the fashion risk-taker stood out from the crowd, making a stunning impression on fans and film lovers alike.

Suiting up, Chalamet wore a full Alexander McQueen look on the carpet that consisted of a sharp asymmetrical double breasted tailored jacket accompanied by straight leg cigarette trousers. The “Call Me By Your Name” star opted for intense bling around the neck, the star styling a diamond encrusted choker shaped very cleverly like bones. Seemingly, his every other finger was adorned with chunky statement-making silver rings that packed a stylistic punch.

On the footwear front, the Oscar-nominated thespian returned to his grungy roots, slipping into white leather  boots with a glistening finish and slightly elevated thick rubber soles. The style further streamlined his outfit, while ensuring it daringly toed the line between dapper and punk aesthetics.

Backed by his boyish charm, the almost etherial outfit Chalamet wore was a stark comparison to his on-screen lover’s black and gold Schiaparelli gown shaped by a gilded corset.

Directed by Luca Guadagnino, “Bones And All” is a drama and romance film that follows Maren Yearly, played by Taylor Russel, and Lee, played by Timothée Chalamet, as they navigate their painful pasts while kindling a blossoming relationship as they embark on a 3,000-mile odyssey through the backroads of America. The film is set to release Nov. 23, 2022.