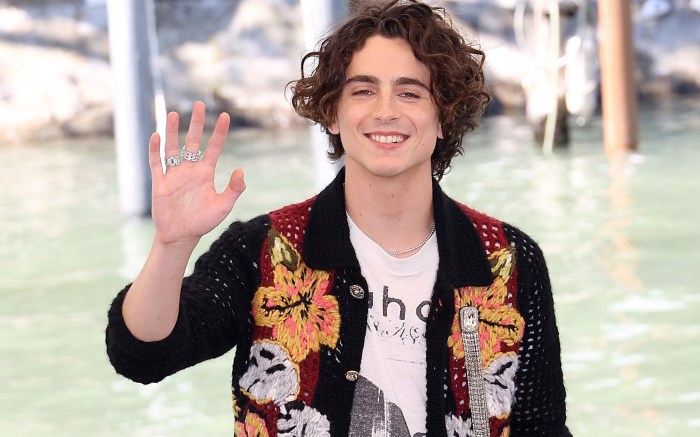 Timotheé Chalamet made a fashion statement at this year’s Venice Film Festival.

While attending the press conference for his newest film “Bones and All” in Venice, Italy, the actor wore a maroon and black knitted sweater featuring a floral design and crystal buttons. Chalamet paired the look with a white Bauhaus graphic t-shirt with camouflage print cargo shorts.

The actor slipped on a black ankle high combat boot with an overlapping tongue for his footwear. To complete his look, Chalamet wore a watch with a small beaded necklace.

Chalamet plays ‘Lee’ in the new coming of age romantic horror film directed by Luca Guadagnino. Actress Taylor Russel will be playing his love interest in the film. Other stars like Christiano Ronaldo’s girlfriend Georgina Rodriguez, Regé-Jean Page, and Dylan Sprouse have been attending the film festival this year. Chalamet was already in Venice shooting the sequel to the hit science fiction film ‘Dune: Part Two’.

Chalamet is known for being a style icon for his age group. The ‘Dune’ actor is known for not working with a stylist. Nevertheless, Chalamet still makes noteworthy looks with pieces from Alexander McQueen, Louis Vuitton, and Stella McCartney. He has a very experimental style with a bit of edge. At the Met Gala, he wore a Haider Ackerman white suit with Converse Chuck Taylor All Star sneakers.

The actor is not scared of adding any patterns or glitter to a red carpet look either. If he is not making a formal appearance or shooting a scene for a movie, the actor likes to keep things very casual. He loves a graphic tee with a pair of shorts. Sometimes, he will hide his gorgeous set of curls with a bucket hat. The actor’s go-to footwear is patent leather boots or a pair of casual shoes like Converse or Vans. Chalamet continues to bring his authentic self to his fashion looks.