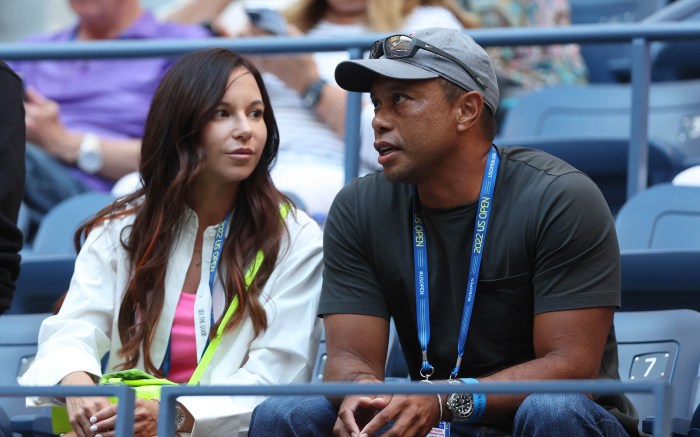 Tiger Woods attended the U.S. Open at the USTA Billie Jean King National Tennis Center in Queens, New York City, with his new girlfriend, Erica Herman. The pair showed their support for Serena and her sister Venus Williams for what could be Serena’s last match.

The couple sat in the same box as Venus on Friday just before Serena’s game with Anett Kontaveit of Estonia and watched everything go down in cozy athleisure in bold hues. Making her mark in the stands, Herman wore an ensemble featuring bright neon shades of pink and green that made the athlete’s girlfriend hard to miss.

Starting off strong the outfit was comprised of a simple pink tank top which the restaurant manager wore under a white high neck jacket with a stiff structured collar, the breezy material cuffing at the wrists. Based off of the way Herman sat, it seems that she was wearing shorts of some kind.

Accessorizing to match her color palette, Herman wore a neon green crossbody, which she paired with a gold watch and a chain necklace.

Woods kept it easy breezy, donning a fitted plain black tee which he wore with dark wash denim jeans. The professional golfer wore a light grey hat and accessorized with reflective shades and a silver watch.

Although her shoes were not visible in the photos, when it comes to style, Herman appears to keep her footwear choices simple and versatile. On and off the golf course, she can be seen in low and high-top sneakers in an array of neutral and tonal colors, hailing from brands including Dior and Nike. Woods’ more casual ensembles also feature comfortable Ugg boots in similar hues. For more formal occasions, she’s been spotted in heels ranging from pointed-toe sock boots to pointed-toe pumps, accented with features including metallic panels, capped toes and Mary Jane straps.