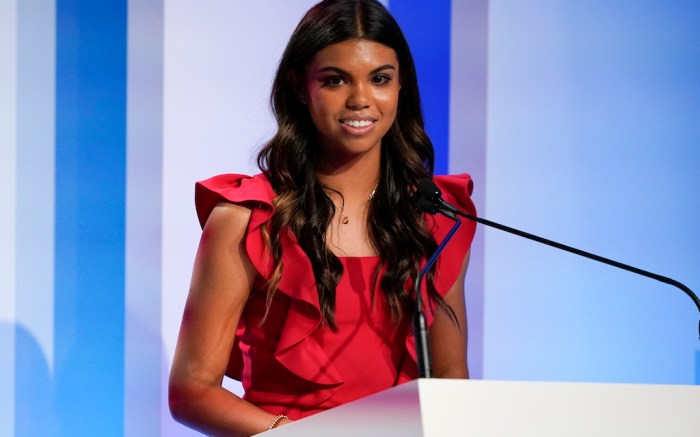 Sam Alexis Woods, daughter of golfing legend Tiger Woods, floats like a butterfly in her latest look. On Wednesday, the World Gold Hall of Fame induction ceremony took place in Ponte Verda Beach, Fla., where the 14-year-old helped honor her father as one of the inductees. The Hall of Fame recognizes outstanding achievement in the sport and included new members Susie Maxwell Berning, Tim Finchem and Marion Hollins.

Emotions were running high for Sam and Tiger during the presentation, where she gave an emotional speech that brought tears to her father’s eyes. From referencing her grandfather Earl Woods’ influential words, “train hard, fight easy,” to sharing funny anecdotes about what Tiger does off-duty, Sam provided a broader perspective of the legendary golfer. Tiger was joined by his 12-year-old son Charlie and his girlfriend Erica Herman.

For the outfit, Sam Alexis went with a red minidress that featured a square neckline paired with ruffled shoulders for a modern feel.

Accessories-wise, she went light wearing a gold necklace and silver/gold bracelets that complemented her ensemble nicely.

To ground everything, she had on a pair of multicolored 3D butterfly heels from Sophia Webster that coordinated with her red color scheme. The Chiara Sandal retails for $895 and has a heel height of approximately 4.25 inches. The shoes featured a metallic red toe strap with a scalloped hem around the upper edge of the footwear. Inspired by the “red peacock” butterfly, the wings resemble an animal-print pattern and the design includes a tiger print on the counter and heel — no doubt a nod to her father.

Throughout Tiger Woods’ career, the Nike collaborator has won 82 Professional Golfers’ Association Tour wins and he is tied with Sam Snead for the most PGA Tour wins. Back in 2000, he had the lowest actual scoring average in PGA Tour history with a 68.17 score, far exceeding the 68.33 average set by Byron Nelson in 1945.