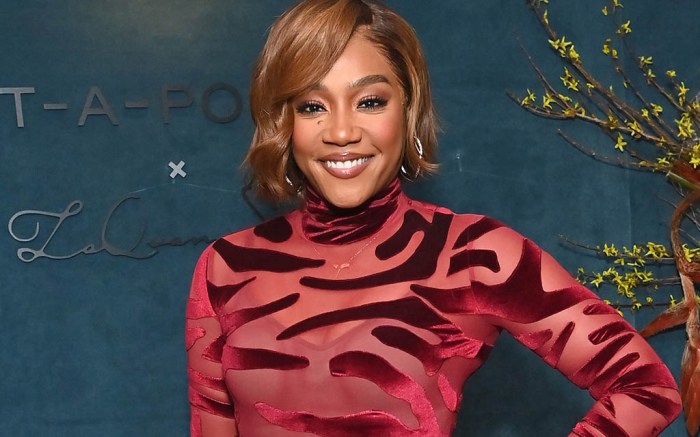 Haddish arrived in a long-sleeve red bodycon dress covered in abstract tiger stripes. The dress, made by Smith, was made of a semi-sheer material and incorporated a high neckline that further elevated her edgy mini.

As for accessories, Haddish kept it simple with hoop earrings and carried a black Net-a-Porter bag in one hand.

To ground everything, she chose heeled sandals The shoes matched the red color of her dress and had a height of approximately 3 inches.

Haddish has a modern and trendy clothing sense that she often displays in streetwear pics, at live appearances and on her Instagram feed alike. For example, during NBA’s All-Star Weekend, she donned a fuchsia wrap coat dress coordinated with matching sandals for a monochromatic and sophisticated appearance. Also, for the same festivity, just at the actual game, Haddish wore a matching electric blue outfit paired with white slouchy boots and a chic blond bob.

The “Girls Trip” star has also made a name for herself within the fashion industry, having starred in campaigns for Saks Fifth Avenue.

Flip through the gallery to see Haddish’s breakout style statements.

Put on a pair of red sandals for a punchy look.