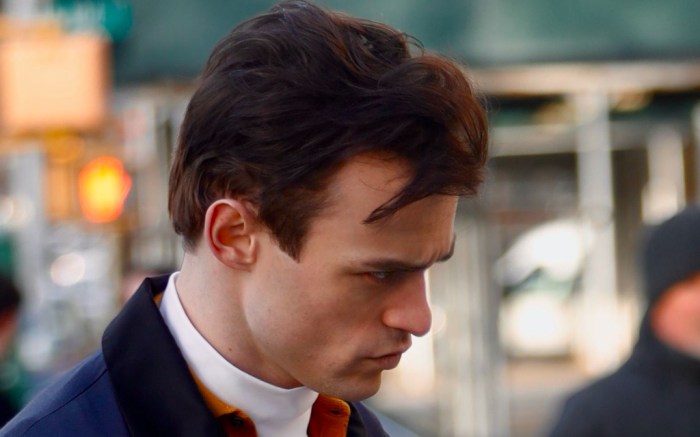 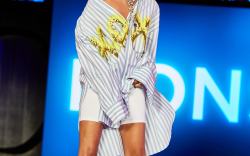 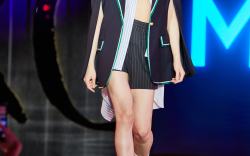 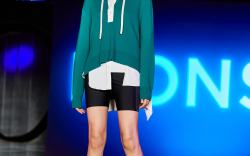 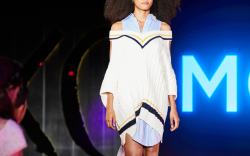 Hey Upper East Siders, FN here—your one and only source into the scandalous live’s of Manhattan’s elite. Thomas Doherty was spotted filming the second season of HBO Max’s “Gossip Girl” on Monday in preppy-meets-bohemian style. The rebooted drama series centers on privileged New York City teenagers, whose private lives are covered on an anonymous Instagram page. Doherty filmed a scene with Emily Lind and Evan Mock at The Museum of the City of New York, which serves as the fictional Constance Billard-St. Jude’s School in the “GG” universe.

While in character as student Max Wolfe, Doherty wore a white turtleneck top beneath a golden yellow sweater. Styled by Eric Daman, the actor’s greatest statement came from a blue satin Amiri jacket with a sharp black collar. The garment gained a retro edge from printed billiards cue and pool balls. Doherty’s look was finished with wide-leg khaki pants that wee cuffed at the hems, as well as a pair of colorful striped socks.


When it came to footwear, Doherty laced up in a pair of Dr. Martens brogues. The “Descendants” actor’s $220 1461 Mono style featured monochrome oxblood patent leather uppers with a lace-up silhouette, as well as rounded toes, rubber soles and welt stitching. The pair completed the actor’s uniform outfit with a sleek finish, while standing out as an edgy and slick contrast to standard brogues or loafers.

Doherty’s loafers are part of the growing popularity of thicker, more utilitarian soles in men’s formal footwear. Popular changes have included patent textures, chunky soles and jewel-toned colors, as seen in recent pairs by Berluti, Prada and G.H. Bass. Aside from Doherty, revamped brogues by Christian Louboutin and Tod’s have been spotted on Machine Gun Kelly, Charlie Puth and Tom Holland in recent weeks.


Doherty is a recent arrival on the fashion scene from his “Gossip Girl” role. However, from his red carpet appearances, the “High Strung” actor seems to favor loafers and boots by Salvatore Ferragamo, Givenchy and Thom Browne. Converse sneakers are his go-to style when off-duty. As Wolfe, Doherty frequently wears loafers, boots and sneakers by Louboutin, Gucci, Alexander McQueen and other luxury labels. The actor has also begun to make an impression in the fashion world, starring in a Browne campaign and attending Coach and Dior runway shows during Fashion Month.