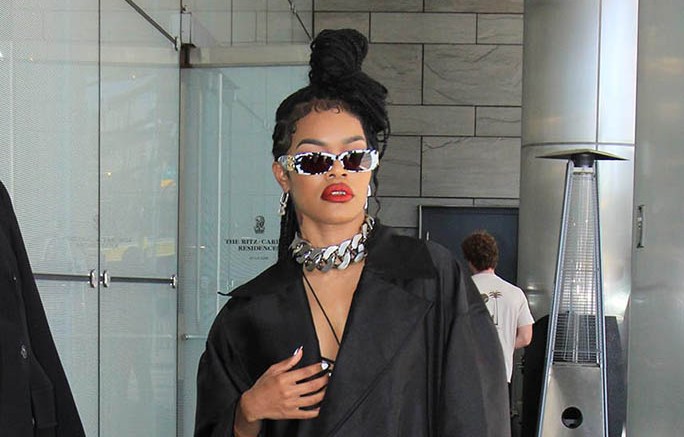 Teyana Taylor made an edgy statement at the 2022 BET Awards held at the Microsoft Theater in Los Angeles on Sunday. Culture’s biggest night featured performances by Jack Harlow, Latto, Chloe Bailey, Chance The Rapper, Ella Mai and Diddy, who was also honored with the Lifetime Achievement Award.

Taylor showed up in style for the annual event, serving a monochromatic moment with standout accessories. The multi-hyphenate entertainer posed for photos in a black trench coat that had silver stud embellishments and white tassels on the sleeves and the side.

Taylor added eye-catching elements to her ensemble with rectangle Balenciaga sunglasses and a thick chain choker. She rounded out the look with a bold red lip and styled her long lustrous locs in a top knot bun. Her pointy black boots peak out under her coat. The shoe style appeared to have a slouchy structure.

When it comes to fashion, Taylor is the queen of versatility. She has a personal fashion aesthetic that combines a tomboy swag with high-fashion glamorous looks. She has made a name for herself within the fashion industry by collaborating with UK-based online retailer, PrettyLittleThing and Reebok.

The BET Awards celebrates the achievements of musicians, actors, athletes and more throughout various entertainment fields. The first BET Awards took place in 2001 to celebrate Black culture and Black excellence. Taraji P. Henson was the host of this year’s show with performances by Lizzo, Latto and Jack Harlow. Leading nominations include Doja Cat with six nods, Ari Lennox and Drake with four nods each.