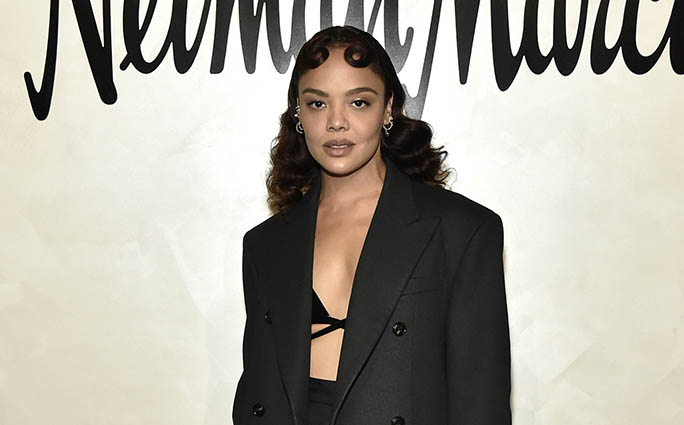 Thompson served a monochromatic moment at the affair, arriving in an all-black ensemble. The Emmy-nominated actress wore a sharp blazer jacket over a plunging bralette top. The double-breasted overcoat had slightly pointed shoulder pads with wide lapels and side slant pockets.

Thompson teamed both tops with slinky black trousers that included front pleats at the center. To further elevate the moment, the 38-year-old entertainer accessorized with small dainty earrings, several midi rings and a sparkling silver handbag.

Letting the look speak for itself, the “Creed” star opted for minimal makeup and pinned the front of her hair down and let the rest of her wavy tresses cascade on her shoulder.

When it came down to the shoes, Thompson appeared to tie her look together with a towering set of platform heels. The chunky silhouette peaked out slightly underneath her pants and had a stacked outsole.

Thompson is not one to go the expected route when it comes to fashion. Whether she’s experimenting with fun beauty looks or putting twists on classic pieces, her choices regularly land her on best-dressed lists. For footwear, the “Creed” star favors wrap-around heels, chunky combat boots, towering platform heels, and leather loafers.