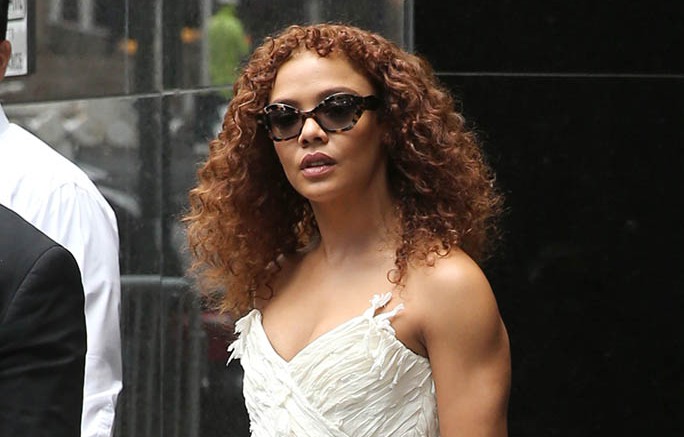 Tessa Thompson has been on a serious style spree while promoting her new film “Thor: Love and Thunder.” The Marvel movie officially hits theaters on July 8 and also stars Natalie Portman, Chris Hemsworth and Christian Bale.

On Monday, Thompson was spotted outside ABC Studios in New York City. The Emmy-nominated actress stepped out in a head-turning white dress. The strapless number featured a plunging V-neckline, ruched material and detailing throughout and a fringe hemline.

The 38-year-old entertainer styled her auburn hair curly and opted for soft glam with a neutral pout. Thompson gave her look a luxe touch with sleek round shades and black Armani top handle bag. The mini accessory featured small straps and a wide flap closure. To let the look speak for itself, she added simple stud earrings and a few midi rings.

Rounding out Thompson’s look was a pair of cream knee-high boots. The silhouette had a sharp pointed-toe and tiny stiletto heel. Popularized in the ‘60 go-go era, knee-high boots leave the wearer’s knee exposed, but cover the calves. Often worn with short ensembles, the style is a wise choice in colder months for protecting the leg from the elements while still allowing the wearer to show some leg.

Thompson is not one to go the expected route when it comes to fashion. Whether she’s experimenting with fun beauty looks or putting twists on classic pieces, her choices regularly land her on best dressed lists. For footwear, the “Creed” star favors wrap-around heels, chunky combat boots, towering platform heels and leather loafers.