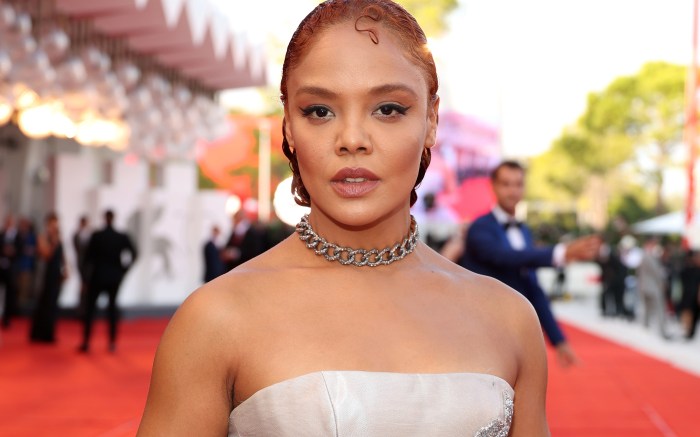 Tessa Thompson made a statement on the red carpet for the world premiere of “White Noise” at the 79th Venice International Film Festival on Aug. 31 in Venice, Italy.

The actress wore a strapless silver bodice dress with three tiered ruffles at the hemline and embroidered beaded detailing. She coordinated a sparkling black pencil skirt to complete the look and black strap stilettos. The look came straight from the Giorgio Armani archives and was originally seen on the runway at the Armani Privé spring 2009 couture collection show.

For accessories, she went for a pair of cat eye sunglasses, a diamond chain link necklace, and two statement rings.

Thompson’s beauty look was a different one than we usually see from the actress. Thompson’s hair is currently dyed an auburn red. For this red carpet appearance, her hair was in a wet-and-wavy look with one noticeable curl placed strategically at her hairline. She went for a natural blush on her cheeks and a glossy lip for her makeup.

“White Noise” is an adaptation of the 1985 novel by Don DeLillo which tells the story of a professor at a liberal arts college and touches on themes such as death, academia, and religion. The film will also show at the New York Film Festival in September.