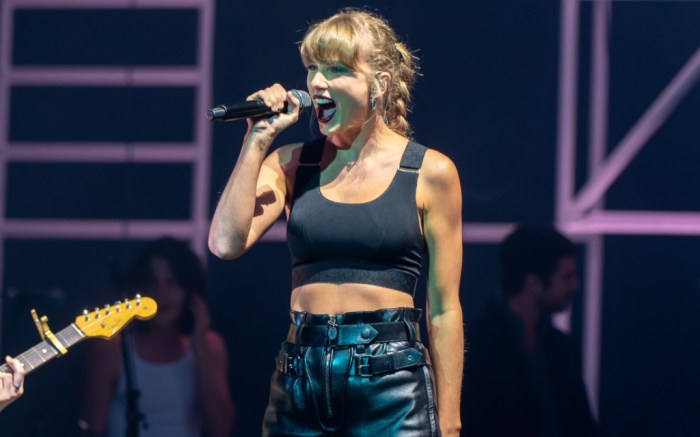 The award-winning singer-songwriter joined Haim onstage during their concert at the O2 Arena in London on Thursday. The sister trio band, made up of Alana, Danielle and Este Haim, hit the O2 as part of their international tour. They performed the remix of their song “Gasoline,” which features Swift on the track. The “August” singer also performed her hit song, “Love Story” while on stage.

For the performance, Swift matched the Haim sisters. She wore a pair of black leather pants from Louis Vuitton with a black sports bra top. The high-waisted trousers featured a wide leg opening and belt detailing. Each of the Haim members matched Swift by also wearing the same pants, though they each opted for a black bikini top.

Swift accessorized her look with hoop earrings and a few silver rings. She finished off her look with a pair of black booties from Christian Louboutin. Her boots featured a platform sole and a thick heel, reaching at least 5 inches.

When it comes to red carpet style, Swift often opts for bold but feminine pieces, like her 2020 Grammy’s floral look. On the footwear side, Swift’s red carpets and onstage performances often include pumps, sandals and tall boots from brands like Christian Louboutin, Chloe Gosselin, Sophia Webster, Aquazzura and more. For her off-duty style, she often sticks to aesthetic-focused pairs based on her current album cycle. The “Tim McGraw” singer regularly wears ankle boots from Christy Dawn, Hunter and Ugg, as well as Nike and Golden Goose sneakers.

Click here to see more of Taylor’s edgy style moments over the years.