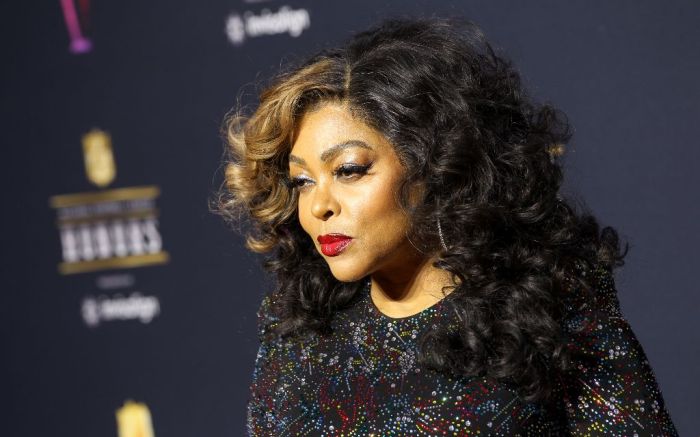 As in-person red carpet events return, celebrities are pulling out all the stops for their fashion looks. Taraji P. Henson was among the many stars to attend the 11th Annual NFL Honors held at the YouTube Theater  in Los Angeles on Thursday night. The entertainer was joined onstage by Mark Wahlberg as they presented Bengals wide receiver Ja’Marr Chase with the Offensive Rookie of the Year award.

Henson added some glitter to the red carpet by posing in a show-stopping sequined number by Alexandre Vauthier. The embellished mini dress had black and maroon accents and included long sleeves, a round neckline and statement shoulders.

“The Peace of Mind with Taraji” host complemented her shiny dress with big curly hair and a bronze side bang. She accessorized her look with thin hoop earrings, several silver rings, sharp pointy nails and a small shimmery clutch.

The “Baby Boy” star continued to brighten up her look with a bold red lip and smokey eye makeup. As for footwear, the Emmy Award-winning actress finished off her look with metallic pumps. The sleek silhouette had a thick strap across the toe and an extremely thin 4-inch heel.

Henson’s appearance comes ahead of the Super Bowl on Sunday. The championship game sees the Los Angeles Rams and the Cincinnati Bengals on the field at SoFi stadium in Los Angeles. The halftime show features performances by Mary J Blige, who released her new album last night, along with Snoop Dogg, Dr. Dre, Eminem, Kendrick Lamar, Sean Forbes and Warren Snipe. The Super Bowl LVI will begin at 6:30pm Est.