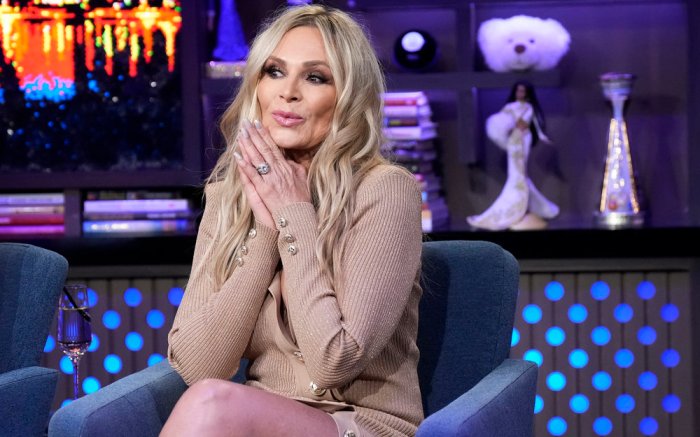 Tamra Judge has returned to “Real Housewives of Orange County.”

Bravo announced the reality TV star has re-joined the cast of “RHOC” season 17 in a recent Instagram video after her appearance on “Watch What Happens Live” on Monday with fellow alum Vicki Gunvalson. Judge came back to the show the next day, claiming that she “forgot something,” before reaching into a basket and pulling out an orange, the signature prop of the show’s opening credits.

A post shared by Watch What Happens Live! (@bravowwhl)

For her brief second appearance, reality star donned a purple, black and gold Mochino Couture catsuit that had long sleeves and long pant legs made of a stretchy fabric with black lettering sprawled. The TV personality paired the purple suit with silver dangling earrings that complemented the gold shine in her bodysuit.

Judge popped on black peep-toe heels that offered the star some extra inches and soon, Judge was ready for her big announcement.

While her appearance on the show was brief the second time around, Judge’s appearance on Monday was more of a sit-down with host Cohen. The TV personality discussed her podcast “Two T’s and a Pod.”. Judge sat down with Cohen and Gunvalson in a tan mini dress with long sleeves. The dress closed in the front thanks to a row of shiny gold buttons that trailed off to the side of the mini dress, creating a slight side slit.

The “RHOC” star accompanied the neutral-colored dress with a silver ring and multiple layered gold chain necklaces, playing on the gold in the large buttons. Judge wore a similar style heel to her announcement outfit, the star strapping on black sandal heels with a peep-toe. The chunky style of heel elongates the legs.