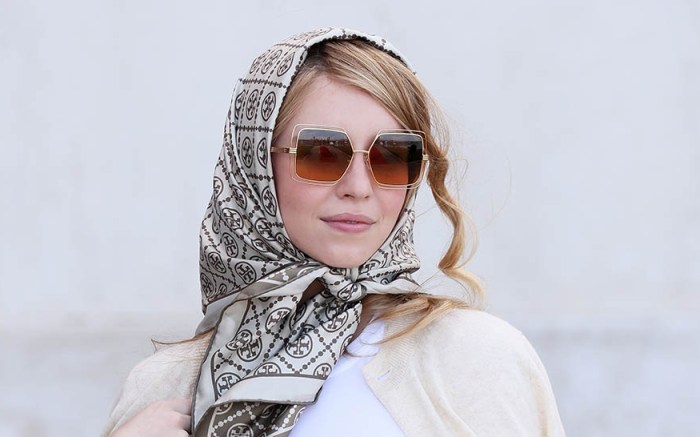 The full Tory Burch ensemble consisted of a white romper belted in the middle, which she paired with a cream cardigan slung over the star’s shoulders. Sweeney wore a monogramed black and white silk headscarf wrapped around her face with gold tinted “Kira” sunglasses with a geometric 60s style that accentuated the Laneige partner’s face.

Repping the brand down to her bag, Sweeney carried an Ella Tall Tote, the bag featuring brown leather straps on cream canvas with the brand’s logo plastered on the front.  The simple but effective styling evokes a charming demeanor that has been replicated on Hollywood’s biggest stars for ages. It’s an elegant way of going incognito, hiding the face and eyes from the camera’s ever present lens.

Flattering her feet, Sweeney donned brown leather “Georgia” slingback heels that paired nicely with the pre-existing color scheme. With a raised Tory Burch logo on each toe, the footwear is immediately recognizable, the sturdy slingback style adding to the romantic nature of the whole ensemble. While plain, the shoes are comfortable and functional thanks to the chunky block heels they have.

PHOTOS: See some of Sydney Sweeny’s best red carpet looks over the years.