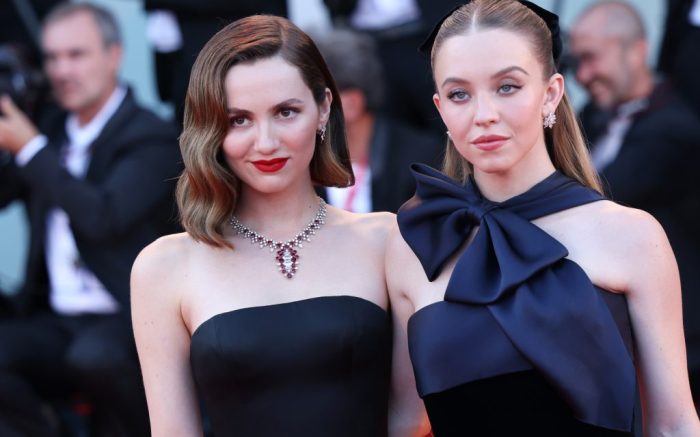 Sydney Sweeney and Maude Apatow made a euphoric arrival at the red carpet for “Bones And All” premiere at the 79th Venice International Film Festival in Italy.

The “Euphoria” co-stars were twinning in black Armani Privé gowns at the event. Sweeney’s vintage garment had a satin neckline and a large bow, creating a halterneck effect. Apatow chose a strapless black dress with a classic trumpet skirt. Each actress’ outfit was complete with gleaming diamond jewelry; Sweeney opted for Tiffany & Co. bracelets and earrings, while Apatow wore a ruby-encrusted pendant necklace and earrings by Cartier.

Unfortunately, the length of their gown didn’t allow for a complete view of their footwear choice. However, Sweeney’s dress had a back slit that revealed her black patent platforms designed by Giuseppe Zanotti. It would be no surprise if Apatow pulled it all together with sandals or platforms as her co-star.

Sweeney accessorized her look with bracelets and earrings covered in crystals, while Apatow wore a statement jewelry piece around her neck. The necklace had ruby stones, adding a pop of color to her outfit.

This is Sweeney’s second look commanding attention at the Venice Film Festival. The actress was seen in a full Tory Burch outfit this Thursday.