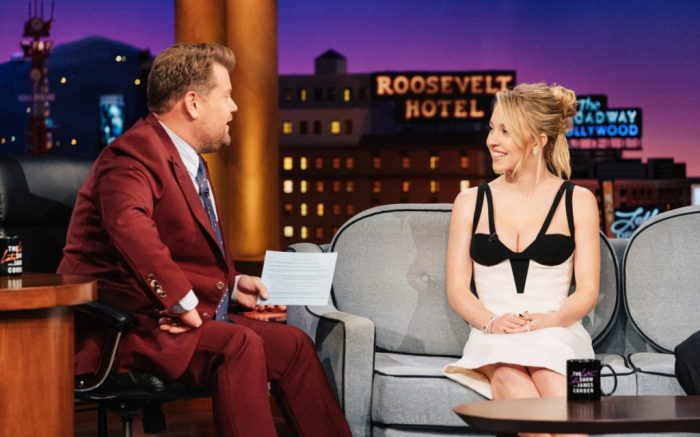 Sydney Sweeney was the picture of Hollywood glamour while appearing on “The Late Late Show with James Corden.” The actress guest starred alongside actor David Diggs.

The “Euphoria” star sat down with Corden to discuss her new arc as Cassie in the HBO drama’s second season. For the occasion, she wore a sleek white knee-length dress from Christian Siriano’s Pre-Fall 2022 collection. The number featured black cutout straps atop a slim-fitting V-shaped bodice, creating a bra top-like silhouette. Styled by Molly Dickson, Sweeney’s look was complete with sparkling David Yurman jewelry.

When it came to shoes, the “Handmaid’s Tale” actress opted for a pair of pointed-toe black pumps. The classic style featured glossy leather uppers, adding a sheen to her ensemble. The style also included thin heels that appeared to total 3-4 inches in height. Coordinating with the top of Sweneey’s dress, the shoes gave her outfit additional slickness and enhanced her Hollywood star glamour.

Sweeney’s full interview with Corden, which includes her restoration of a 1969 Ford Bronco and the story of how co-star Alexa Demie broke her toe on-set, can be seen below.

Pointed-toe pumps have re-emerged as a go-to shoe this season, due to their ability to streamline any ensemble. With triangular toes and stiletto heels, pairs add a sharp spin on outfits ranging from dresses to denim. In addition to Sweeney, stars like Nicki Minaj, Paris Hilton and Christina Ricci and Kate Middleton have worn sharp heels by Valentino, Tom Ford and Christian Louboutin in recent weeks.

Sweeney’s shoe styles vary from sleek to sporty. The “White Lotus” actress can often be seen in strappy sandals and pointed-toe pumps adorned with bows, crystals or PVC details by Alexander Wang, Giuseppe Zanotti, Ralph Lauren and Miu Miu. Sweeney’s also worn styles from affordable brands like Aldo. Chunky and low-top Adidas, Gucci and Nike sneakers can frequently be seen in the actress’ off-duty looks, as well. Outside of wearing stylish shoes, Sydney has also starred in campaigns for Tory Burch, Steve Madden, Guess and Savage X Fenty over the years.

Discover Sweeney’s red carpet style over the years in the gallery.