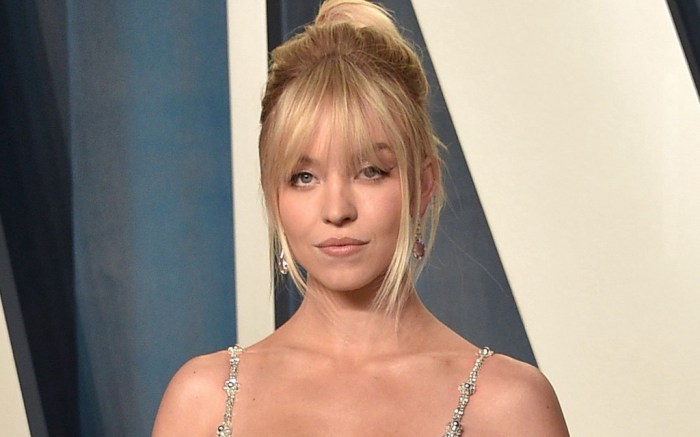 Sydney Sweeney blossoms into spring with style. The “Euphoria” star was a guest on “The Ellen Show” on Thursday, where she talked about her success on her hit HBO series. She also shared how she invited her grandparents to the Hollywood premiere of season two, but she wasn’t prepared for them to see her nude scenes.

“I invited my entire family and I didn’t really think about [the nudity],” Sweeney said. “I was like, ‘It’s a Hollywood premiere! You’ve got to come!’ We were all sitting next to each other and giant screen — ginormous screen.”

Sweeney’s grandmother was in the audience at which when Ellen asked if she approved of the nude scenes. She then returned the question with a thumbs up.

For the appearance, Sweeney wore a blue silk dress by Rodarte that had pink, white and neutral-colored floral prints. The piece had a pussybow neckline and had a flowy hem for a sweet finish. The dress also had lace-trimmed cuffs for a fashionable flair.

To ground everything, she wore a pair of gold slouchy pointed-toe boots. The shoes had metallic uppers and included a heel height of approximately three inches for a streamlined appearance.

When it comes to Sweeney’s clothing tastes, she tends to fancy edgy and stylish silhouettes that align with her flirty and girly aesthetic. For example, she recently wore a multicolored floral ruffled bikini while vacationing in Hawaii. And she also wore a gray floral appliqué dress that was sleeveless and came down to her calves paired with black pointy pumps at the 2022 Film Independent Spirit Awards.

Sweeney has also strived to create a name for herself within fashion. She has starred in campaigns for brands like Guess and Tory Burch.