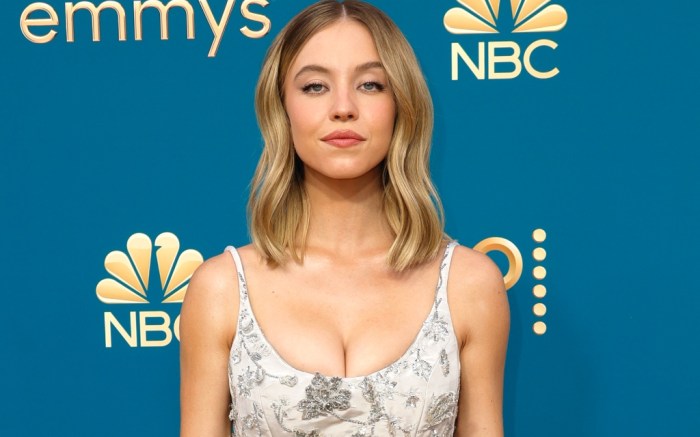 Sinking her feet in the sand, Sydney Sweeney posed for a few outfit photos in the Sahara Desert which she posted to her Instagram today. The dreamy outfit the “Euphoria” star wore was only amplified by the unreal background captured in each image.

Basking in the North African sun, Sweeney wore mid-length cream colored shorts that were belted to keep them in place. On top, “The White Lotus” actress styled a tan tank top that she tucked neatly into her oversized pants. The comfortable style only added to the chic nature of the ensemble. On her head, Sweeney wore a hat but would discard the practical accessory for her other photos.

The stand-out item Sweeney wore for her trip to the sand dunes was off white combat boots. The rugged style featured thick rubber soles, reliable tread and a chunky silhouette that was made for serious adventures.

Originally designed to be worn by soldiers on the battlefield, combat boots are utilitarian footwear created for foot protection, ankle support and a gripping tread. Classically made of black leather, combat boots were adopted by counterculture movements in the 1980s and 1990s, including the goth, punk, grunge and heavy metal scenes.

Sweeney often gravitates toward sleek to comfy and sporty shoes. The “White Lotus” actress can often be seen in slingback heels, strappy sandals and pointed-toe pumps adorned with whimsical bows, sparkling crystals or PVC details that act to further elevate her ensembles.

When Sweeney isn’t acting “The Handmades Tale” star can be found partnered up with some of fashions biggest names. The most recent brand to team up with the actress is Miu Miu, the sister brand to Prada, featuring her in its “Character Study” series with famous faces including Emily Ratajkowski and Demi Singleton.

PHOTOS:Click through the gallery to see some of Sydney Sweeney’s best red carpet looks.