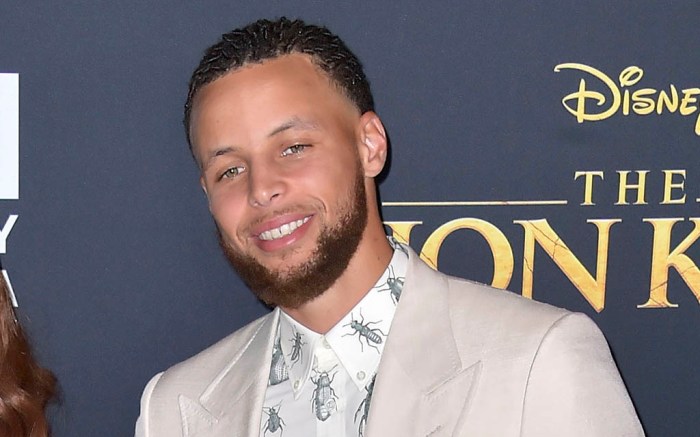 Steph Curry has long been noted for his tunnel fashion choices, often treating the pre-game paparazzi moment as his own personal runway. Sure, his return to the court after a month-long injury was all basketball fans could talk about during the Golden State Warriors’ playoff game against the Denver Nuggets on April 16, but his outfit before the game even started deserves as much attention for being stone cold and straight fire.

Styled by Sherri McMullen, Curry wore a custom Rich Fresh look pairing crisp white low-top sneakers with light gray slacks featuring a black track stripe. On top, the 34-year-old star athlete wore a simple black shirt and a gold chain, carrying an understated black briefcase-like bag. But the standout piece to tie the otherwise safe look together was a stunning neoprene trench coat in a saturated light blue. Featuring a curved gray-blue panel accent on one side, the sleek, expertly tailored trench was finished with rounded button accents and a statement lapel.

Fans were all about the fashion risk, praising Curry’s style game on the Rich Fresh Instagram account and McMullen’s social media. One fan wrote, “This trench is cold.” Another fan added that Curry was “fitted as smooth as his shot.” Rapper E40 even commented on Rich Fresh’s Instagram page, simply writing, “Bossy.”

With a confident swagger that only such an outfit can inspire, Curry walked into the locker room telling paps that he was “ready to go” for the playoff game. And he wasn’t mincing words.

After changing into his basketball gear, Curry made his much-anticipated return to the court in Game 1 of the playoffs against the Nuggets, though he only played in short sprints. Prior to the game, the Under Armour star player had been recovering from a sprained ligament in his left foot and a bone bruise, regulated to the bench for a month while completing physical therapy. With Curry’s help, the Warriors beat the Nuggets, 123-107. The two teams will face off again in Game 2 on April 18. While Curry’s status for the upcoming game is unknown, you can bet he’ll be turning looks on his way to the tunnel.