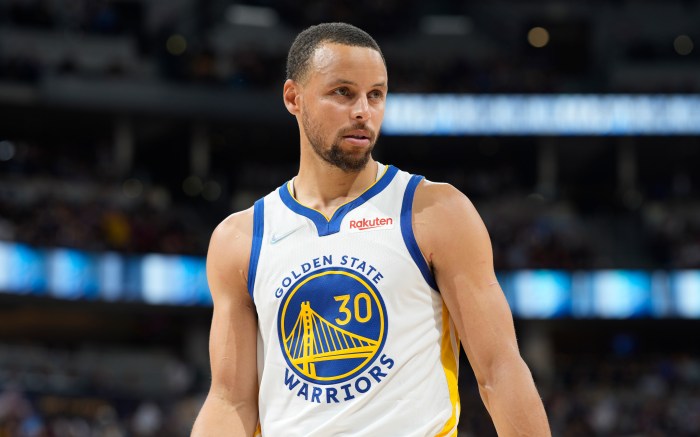 Steph Curry is currently laser-focused on pulling out a championship win for the Golden State Warriors against the Boston Celtics. But the “fresh” fashion lover always has a little attention to spare on an eye-catching tunnel ‘fit.

For Game 1 of the NBA Finals last night, the 34-year-old point guard wore a custom Rich Fresh suit styled by Sherri McMullen. The bespoke suit’s black blazer was impeccably tailored, featuring maroon, emerald, and yellow arches on the lefthand side of the jacket. Curry wore the eye-catching blazer over a simple white tee.

The Warrior guard paired the jacket with a pair of slim-fit black trousers which had coordinating maroon and green stripes down the side. For footwear, Curry wore Golden Goose shoes in a white and metallic gold colorway.

Fans seemed to love the crisp look, with fire emojis flooding the comments on McMullen and Rich Fresh’s respective posts of the look. Other fans called the look “cold,” “fire,” and “fresh,” while one dubbed the look a “power drip.”

Curry has often worn bespoke Rich Fresh designs for his pre-game tunnel looks. Back in mid-April, the star player wore an icy blue neoprene trench for his tunnel strut, following that look up with a teal neoprene Rich Fresh tracksuit later that same month.

Though Curry was certainly dressed for success, a sick outfit wasn’t enough to pull out a win. The Golden State Warriors lost to the Boston Celtics in Game 1 of the NBA Finals, 120-108. Game 2 is on June 5 at 8 p.m. ET.