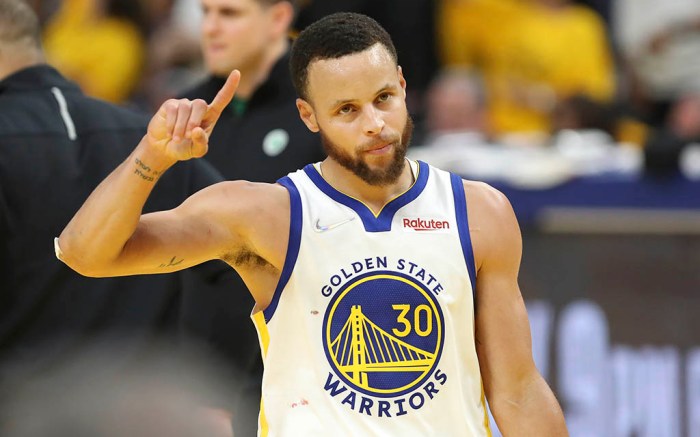 Steph Curry isn’t letting anyone bash his wife for the sake of sporting rivalry. And he’s talking back to those attempting to cut Ayesha Curry down through his NBA Finals fashion choices.

After Game 5 of the championship series against the Boston Celtics yesterday, Curry wore a simple graphic tee reading “Ayesha Curry Can Cook” to his post-game interview. When asked about the shirt during the interview, the Golden State Warriors point guard deflected, telling a reporter to “ask Twitter” what the shirt was referencing. For those not in the know, the shirt references a chalkboard sign that was recently posted outside of a Boston bar which read, “Ayesha Curry Can’t Cook.”

Ayesha Curry has made a name for herself as a television cooking personality and cookbook author. Though she has no formal training in the culinary sphere, Ayesha starred in a two-season Food Network show and authored her own cookbook “The Seasoned Life.” She’s also highlighted her passion for cooking via her YouTube channel. Throughout her career, Ayesha also opened several restaurants, launched a meal delivery service, partnered with food-adjacent brands, and supported efforts addressing childhood hunger.

Curry wore the same outfit in the tunnel before the game, only he wore a plain white tee instead of his custom creation, saving the graphic tee for after the game.

Curry has often worn bespoke Rich Fresh designs for his pre-game tunnel looks. Back in mid-April, the star player wore an icy blue neoprene trench for his tunnel strut, following that look up with a teal neoprene Rich Fresh tracksuit later that same month. On June 2, Curry wore a color-blocked tracksuit for Game 1 against the Celtics.

It appears all the infamous Boston trash-talk isn’t impacting Curry’s performance. The Golden State Warriors won Game 5 of the series, 104-94.

The NBA Finals is the annual championship series of the National Basketball Association, which closes out the basketball season. This year’s showdown is between the Boston Celtics and the Golden State Warriors. The finals, which started on June 2, are a best-of-seven series, meaning the first team to win four games takes home the championship. Currently, the Golden State Warriors are leading the Boston Celtics in the series, 3-2.