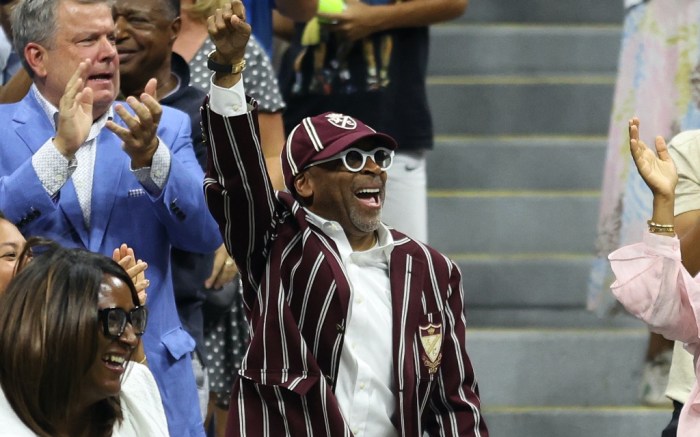 The 2022 U.S. Open is in full swing, and the celebrity attendees continue to make appearances.

On Wednesday, day three of the popular tennis tournament, Spike Lee joined the crowd. He watched intently as Serena Williams played an intense game against Anett Kontaveit at the USTA Billie Jean King National Tennis Center in Queens, New York City. Several other well-known faces like Bella and Gigi Hadid, La La Anthony and Zendaya traveled to the tournament to cheer on Williams during her final US Open.

For the match, Lee wore a coordinated look. He paired a maroon red and white striped blazer with white trousers. He added a matching maroon baseball cap to his look. Both his hat and jacket were from Ralph Lauren and were dedicated to his alma mater, Morehouse College. Under his blazer, Lee wore a polished white button down shirt. He accessorized with white round sunglasses.

He finished off his look with matching high-top Nike sneakers. His kicks featured white leather pieces as well as dark red. He also wore coordinating socks that rose above the shoes. The director is known to style a cool pair of sneakers. He wore a custom Air Jordan pair, gifted by Michael Jordan himself, to a basketball game last year.

The U.S. Open is the final 2022 Grand Slam tennis tournament, held at the Billie Jean King National Tennis Center in New York City. Running from Aug. 29 to Sept. 11, the tournament will air on ESPN, ESPN2 and ESPN Plus. 128 players will be competing in this year’s competition, including Serena Williams, Daniil Medvedev, Rafael Nadal, Iga Swiatek and Anett Kontaveit. The event also draws a range of celebrity guests; so far, this year’s has included Queen Latifah, Rebel Wilson, Lindsey Vonn, Hugh Jackman and Bella and Gigi Hadid.