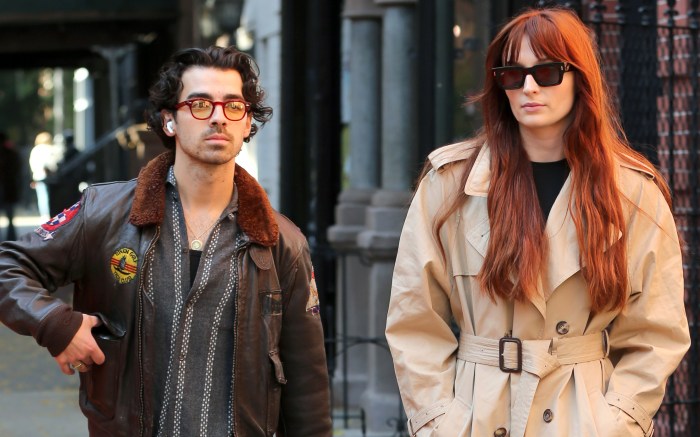 Sophie Turner and Joe Jonas stepped out in the West Village in New York today. The fashion-forward couple wore similar seasonal ensembles with a utilitarian twist.

Turner opted for a black long-sleeve shirt layered under a beige trench coat and rounded out her outfit with black frames.

Footwear-wise, the “Game of Thrones” actress slipped into a classic style for this time of the year. She wore a pair of knee-high leather boots in black, which were partially visible beneath her long coat. The shoe incorporated a rounded arrangement, elevated sole, and slightly wedged heel.

Since the 1900s, leather boots have remained a wardrobe and footwear staple that has adapted into several styles, each comprising a signature composition that stands out from one another, such as combat-structured boots versus cowboy boots or those with laces. They have also included designs otherwise attributed to footwear styles, such as ankle boots with a sculpted high heel or knee-high ones containing a platform wedge. Brands including Celine, Jimmy Choo, Tory Burch, and Yves Saint Laurent have made the signature shoe a part of their catalogs and continue to debut these footwear styles.

As for Joe Jonas, he donned a gray button-up with a checker-lined pattern in vertical lines throughout the shirt. He layered his top with a brown leather jacket that featured wooly lapels, two flap pockets, and emblems embroidered onto the piece’s front and upper sleeves and coordinated with gray jeans. Jonas wore ruby red-rimmed glasses and a gold necklace. The “Sucker” singer matched Turner’s footwear choice, adding a pair of rounded-toe black leather boots.

When it comes to style and footwear, Turner and Jonas have donned labels, including Louis Vuitton, Nanushka, Isabel Marant, Nike, and House of Holland.