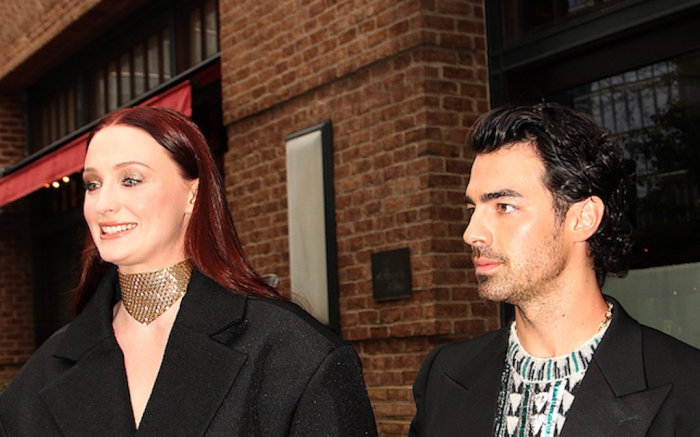 Sophie Turner continues to put her own spin on maternity-wear. The “Game of Thrones” actress was spotted with her husband Joe Jonas while the two were out in New York City yesterday.

For the outfit, Turner went with an oversized black blazer that had a billowing lapel and two gold and black buttons for a glitzy finish. The garment doubled as a dress and also had a plunging neckline.

The look recalled the “no-pants” trend that influencers such as Ariana Grande, Olivia Culpo and countless more embraced ubiquitously on the streets throughout 2018. It made a brief revival last year with Bella Hadid, among other stars, and it could make a return for summer with Turner leading the way.

The “X-Men” actress went bold with her accessories and opted for a pair of red-hot leather gloves along with a black Louis Vuitton handbag that had a black strap with the brand’s name etched in multicolored lettering. She also wore a gold diamond-encrusted necklace that acted as a choker for another sparkly layer. Turner also donned a pair of sheer black tights for a modern flair.

Jonas, on the other hand, went with a black suit that incorporated a slightly oversized suit jacket along with slouchy black trousers and a black, black and white graphic-print sweater.

Turner grounded her look with a pair of patent leather black sandals with straps across the toe, midfoot and ankle. The heels had a height of approximately 4 inches and gave her chic ensemble an edgy twist.

Turner and Jonas welcomed their daughter Willa in July 2020 and officially revealed in an interview with Elle UK at the Met Gala on Monday that they are expecting their second child together.

Turner has also made a name for herself within the fashion industry. She has starred in campaigns for Louis Vuitton and is a fixture at fashion weeks.

Put on a pair of black sandals for a refined finish.