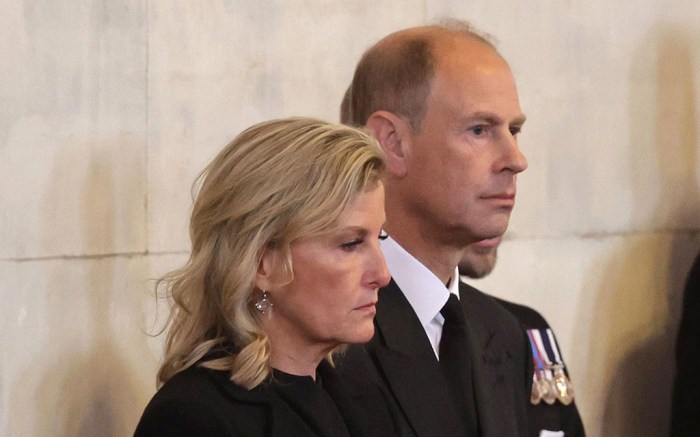 Sophie, Countess of Wessex paid her respect to Queen Elizabeth II alongside her husband Prince Edward, Earl of Wessex during the last royal vigil around the late monarch’s coffin today at Westminster Hall in London. The Countess and her husband wore all black, per mourning dressing tradition.

Sophie donned a black button up blazer which she put on over a mock neck shirt. The royal family member wore silver dangling crystal and pearl earrings.

Beside her, Edward wore a double breasted button up suit fitted with pockets which he wore over a white button down collared shirt and a black tie.

The tradition of black mourning clothing started during the Roman Empire. Back then, the deceased’s family would wear a dark-colored toga as a sign of grief. This tradition persisted throughout medieval times. By the late 19th century, black clothing had become associated with mourning after Queen Victoria spent 40 years wearing only black to mourn the loss of her husband, Prince Albert.

Buckingham Palace said that the Queen’s state funeral will take place on Sept. 19 at 11 a.m. The Queen will lie in state in Westminster Hall for four days to allow the public to pay their respects. The fashion industry has also joined the nation in mourning, as the British Fashion Council has recommended that London Fashion Week shows on Sept. 19 should be rearranged.