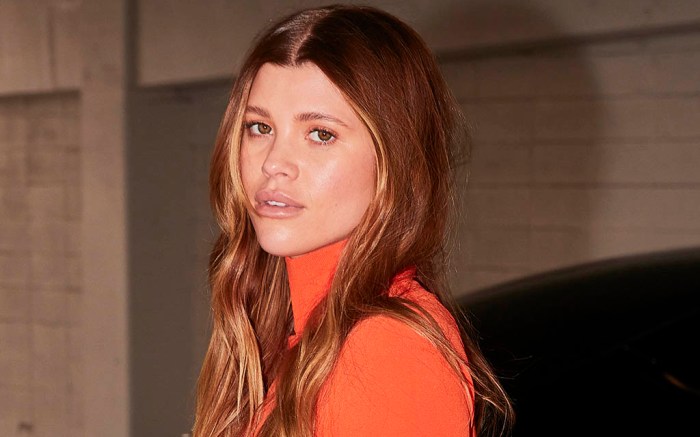 Noted for her sophisticated yet trend-forward style, it’s no surprise that Sofia Richie found a versatile footwear companion to her spring wardrobe with Reebok’s Classic Leather sneakers, of which she’s been seen wearing several times in the past two months. And for only $80, the sneakers are a smart investment.

Most recently, Richie paired the effortlessly sleek white sneaker with slightly-oversized black trousers and a bold orange turtleneck. Wearing her hair in loose waves, she accessorized the look with black sunglasses and a black belt with gold hardware. The look mixed business-casual pieces with simple sneaks, creating a sort of high-low look you’ll want to re-create yourself.

While the sneaker style debuted nearly 40 years ago in 1983, the brand re-released the iconic silhouette with a “slightly refined and evolved design” for spring 2022. The shoe features a sleek white leather upper white and a tan rubber sole. Unlike the original shoe style, the re-release features a “slimmer toe shape, improved vamp, and an enhanced two-piece midsole,” according to the Reebok product description. The design also features a foam-covered sock liner, a slim tongue, and a non-bulky collar for a plush feel on the foot.

Notably, the style includes Reebok’s Union Jack logo, which was phased out in 1986. The version of the logo, which is a nod to the brand’s British Lancashire roots, is often featured on re-released products from the Reebok archives.

The 23-year-old star wasn’t alive for the sneaker’s reign as a must-have silhouette upon its original release in the ’80s, but she’s part of the crew of stars causing the revamped Reebok style to have a resurgence in popularity. Reebok’s Classic Leather sneakers have also recently been seen on celebrities like Meghan Markle, Joe Jonas, Sydney Sweeney, Luka Sabbat, Reese Witherspoon, Katie Holmes and more.

Richie was spotted in the shoes  last February in LA, wearing the re-released Reeboks with distressed light-wash straight-leg jeans, a black top and an oversized white button-up top.

See more of Richie’s style through the years.