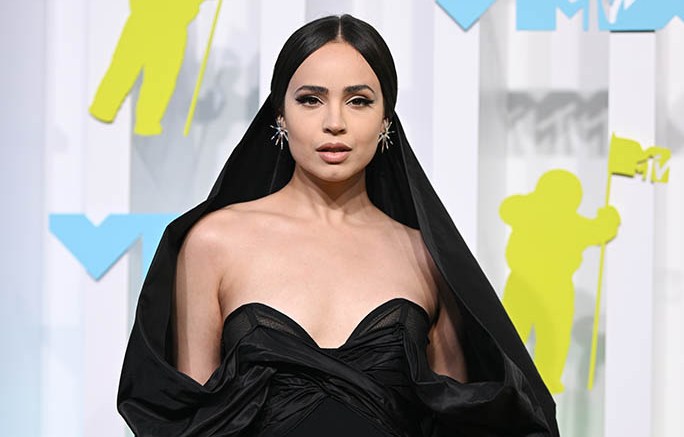 Sofia Carson took a dark approach to red carpet glamour at the 2022 MTV Video Music Awards held at the Prudential Center in Newark, NJ on Sunday tonight. The “Purple Hearts” actress presented Blackpink’s Lisa with the Best K-Pop Award at the annual ceremony, which celebrates the best music videos of the past year and features unforgettable performances, tributes and appearances from the biggest stars in music.

Carson went goth glam for the occasion, arriving in a black fitted sleeveless gown by Caroline Herrera. The garment also included a sheer sweetheart neckline and oversized hood. The singer was styled by Nicolas Bru, whom she has worked with on past red carpet looks.

The former Disney channel protege accessorized with a diamond ring and oversize star-shaped earring studs by David Yurman. Carson’s dark brown hair was swept into a low bun and her makeup was kept simple with a smokey eye and nude lip.

Her footwear choice peaked out slightly underneath her gown and appeared to be a black silhouette with a towering stiletto heel.