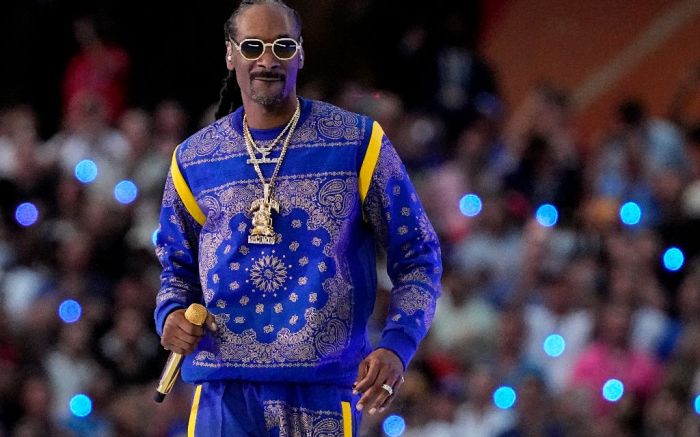 California was filled with a lot of love on Sunday night. For the first time ever the Super Bowl halftime show featured an iconic roster of several hip hop legends. Taking place at Los Angeles’ slick SoFi Stadium in Inglewood, the event included a star-studded lineup that was led by LA’s Finest, Dr. Dre and Snoop Dogg along with performances by Mary J. Blige, 50 Cent, Kendrick Lamar and Eminem.

The halftime show took us through three decades of hip-hop, showing how much West Coast rap has been at the center of our culture all these years. Snoop and Dre put on for their city by kicking things off with their classic hit, “The Next Episode” as well as Tupac’s “California Love.”

To commemorate the history-making occasion, Snoop Dogg made sure to pay tribute to his hometown by wearing a blue and yellow bandana tracksuit. The “Drop It Like It’s Hot” artist complemented his outfit with gold chains, a gold microphone and round frames.

When it came down to footwear, the West Coast legend tied his look together with a pair of white low-top Converse sneakers. The classic kicks included a chunky outer sole and thick yellow laces.

The 2022 Super Bowl took place between the Los Angeles Rams and Cincinnati Bengals on Sunday, Feb. 13 at SoFi Stadium in California. At the game’s start, country musician Mickey Guyton sang the National Anthem, while Jhene Aiko will covered “America the Beautiful.” The 2022 halftime show featured a variety of performers this year, including Dr. Dre, Snoop Dogg, Eminem, Mary J. Blige and Kendrick Lamar. One of the game’s most fun and unique elements were the commercials, many of which have become iconic for memorable content and celebrity cameos; some of this years’ include Arnold Schwarzenegger, Salma Hayek, Lindsay Lohan, Kevin Hart and Trevor Noah in clips for BMW, Planet Fitness, Sam’s Club and Uber Eats.

See more style moments from the Super Bowl through the years.