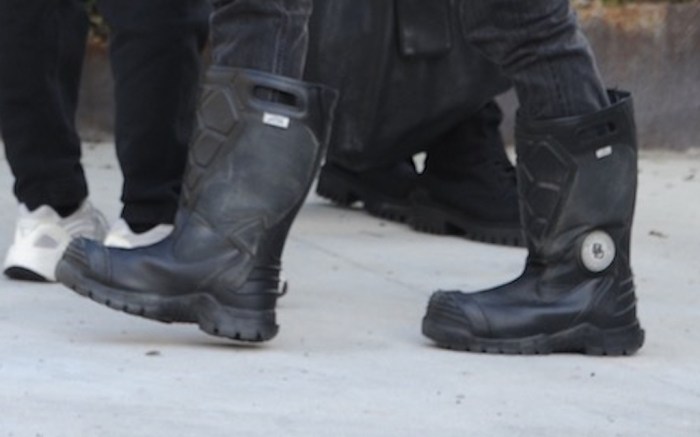 Kanye West’s go-to vintage Red Wing boots have become a hit among the street style set, but one person in particular isn’t a fan: Snoop Dogg.

Though the musicians are friends, the “Gin and Juice” rapper has shared his thoughts on West’s new footwear with DJ Whoo Kid in a new interview. When asked if he’d ever wear the same boots, Snoop instantly shut down the discussion.

“Ain’t no way in the world I can Crip Walk in them motherf—king big-ass space boots,” he told DJ Whoo Kid.

The rapper continued to elaborate, exclaiming he’d only wear them in an extremely desperate—and unlikely—situation.

“Only way I’d wear them mother f—kers is if they got me jumping off the Empire State Building into a motherf—king lake full of gators or some s—t, and I gotta walk on the gators like ‘Pitfall’ to get out of there,” Snoop continued.

Snoop Dogg’s interview comes prior to his performance at the 2022 Super Bowl halftime show. The rapper will perform alongside Mary J. Blige, Dr. Dre, Eminem and Kendrick Lamar on Sunday evening at California’s SoFi Stadium. Despite his reservations about the Red Wing boots, the brand’s #3094 style has become West’s go-to shoe since January for dates in Miami, New York City and Los Angeles with new girlfriend Julia Fox. The style, which is currently unavailable online, features a tall 17″ slip-on silhouette with a Thinsulate lining, chunky soles and steel toes for greater comfort and longevity.

This winter, the same boots sold for $3,050 on eBay on Jan. 12. The style’s high final price tag can be attributed directly to West’s influence; though the pair has been discontinued for years, the same style was previously sold on eBay for $66 in November 2021. The sharp price uphike just two months later is a verifiable seal of approval from the “Stronger” rapper.

What remains to be seen is if work boots resultantly take off as a top menswear trend this year—or if Red Wing possibly brings the style back. The American brand is known for their long-lasting, utilitarian work boots, which could prove ideal for the cold winter and spring months ahead. West is also renowned for his collaborative nature with fashion labels, so it’s not out of the realm of possibility that a co-signed Red Wing collaboration could happen.

West himself is known for skyrocketing the presence and demand for a variety of fashion brands—especially when they become his own style signatures. The star has previously collaborated on fashion and footwear collections with Nike, Louis Vuitton, Gap and A.P.C. over the years. Most recently, he’s launched more shoes within his own Yeezy brand for Adidas, as well as announced the forthcoming Balenciaga x Yeezy Gap collection that drops in June.

Click through the gallery to see West’s shoe styles over the years.