‘And Just Like That:’ Carrie Bradshaw Brings Back That Famous Versace Dress She Wore in Paris for Petrovsky 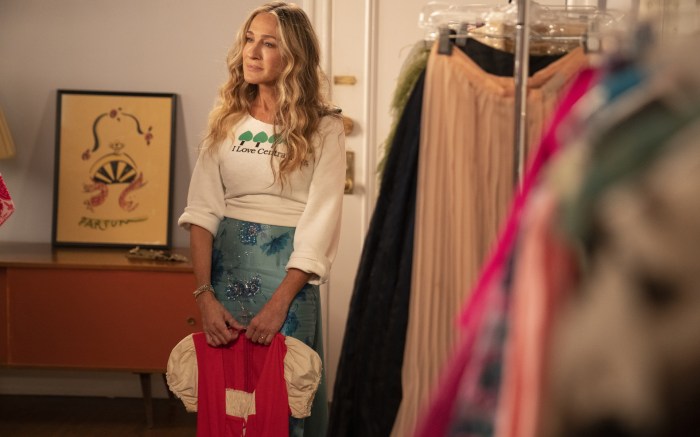 The latest episode of HBO Max’s “And Just Like that” brought back a major blast from the past. On Thursday, fans can see Sarah Jessica Parker as Carrie Bradshaw wearing that Versace dress — you know the one.

In 2004, Carrie famously fell asleep in the reported $80,000 Versace gown in a Paris episode of “Sex and the City’s” final season as she waited all night in her hotel room for boyfriend Alexandre Petrovsky to come home.

Fast-forward nearly two decades and Carrie still has the gown. “I’ve only worn her twice. Once in Paris and once here for fun. I sat at the window and ate a whole thing of Jiffy Pop,” Carrie tells her friend Seema in episode 8 as she goes through her wardrobe to archive. By the end the episode, Carrie is back in the layered, glamorous Versace gown once again — eating Jiffy Pop.

“And just like that, I realized there are some things that should never be put into storage,” she says.

As for Parker, the moment brought back some personal feelings as well.

“We found her. Slithered in. Caught up. It’s been so long. She had much to share. Brief and hard to say goodbye again,” she wrote on Instagram with now and then photos of the dress on screen.

Plus, that wasn’t the only Easter egg in Thursday’s episode. While Carrie packs up her clothes for storage, she also holds up the infamous dirndl dress she wore in 1999’s season 2 of “Sex and the City.”