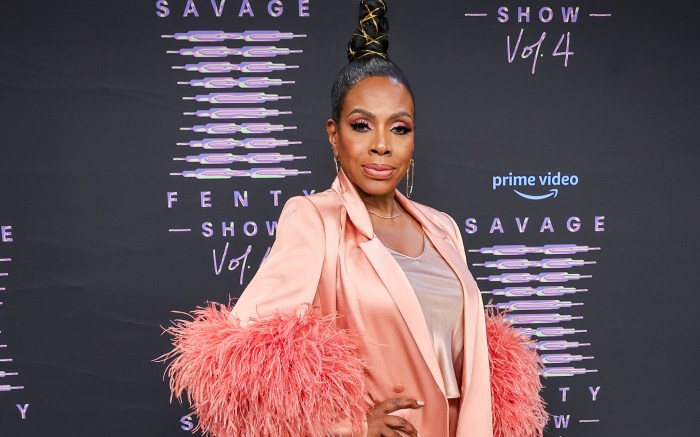 Sheryl Lee Ralph stepped out for the premiere of Rihanna’s “Savage X Fenty Show Vol. 4”, which will be streamed online through Amazon Prime Video on Nov. 9. The event was held today at Simi Valley, Calif.

She accessorized in large gold hoops and a diamond necklace and styled her hair in a topknot bun with gold wiring. Ralph glammed up with pink eyeshadow and a rosy lip.

As for footwear, she slipped into nude flats. The shoe style incorporated a sharp toe and a crystal-adorned design on its vamp, adding an extra sparkle to her outfit and elevating her look by at least 3 inches.

As was revealed yesterday by Savage X Fenty, the “Abbott Elementary” star modeled one of the brand’s glittery lingerie designs. Ralph donned an olive corseted top bodysuit and a long, coordinating cardigan. She topped off her look with several accessories, including two emerald, green beaded necklaces with a jewel-embellished floral broch-like pendant at its center and drop earrings.

Ralph complemented her verdant-hued look with shimmering gold and green eyeshadow decorated across her eye’s crease and lower lash lines. She added five rhinestones to her curly hair’s center part, and a braid styled along her forehead.

Though her footwear has yet to be revealed, Ralph likely wore stilettos, one of the primary shoe styles for prior Savage X Fenty shows since its debut in 2019.