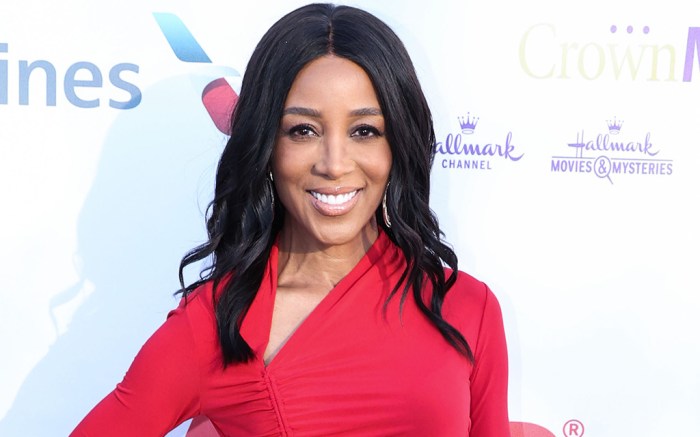 Shaun Robinson may be known for facilitating dramatic moments on TV, thanks to her hosting duties on “90 Day Fiancé.” But the 59-year-old television personality, journalist, and actress recently stepped away from the chaotic drama to attend a low-key charity event in Los Angeles, celebrating a cause close to her heart and her family.

The star attended the 2022 HollyRod Foundation Gala on June 18, an event to raise money to help support autistic people and their families, along with those diagnosed with Parkinson’s Disease. The HollyRod Foundation was founded in 1997 by Robinson’s sister Holly Robinson Peete and her former NFL quarterback husband Rodney Peete. The foundation’s causes are close to the Robinson family: Shaun and Holly’s father died of Parkinson’s Disease in 2002, while Holly’s son received an autism diagnosis in 2000. To the event, Robinson wore a red two-piece outfit featuring a long-sleeve crop top with asymmetrical ruching down the right-hand side. The star wore a matching skirt with ruching at the right hip, which fell into a breezy mid-calf skirt. For footwear, the star wore clear Gianvito Rossi stiletto sandals with see-through straps wrapping around her foot. Wearing a minimal makeup look, the star styled her mid-length locks in a wavy center-part style. Robinson accessorized the look with a smattering of rings and chunky silver hoop earrings, painting her fingers and toes stark white for the occasion.

Robinson is noted for playing host to drama-heavy “90 Day Fiancé: Happily Ever After?” tell-all reunion shows. Notably, another reunion show is likely on the horizon, with episode 10 of season 9 airing Sundays at 8 p.m. ET on TLC.