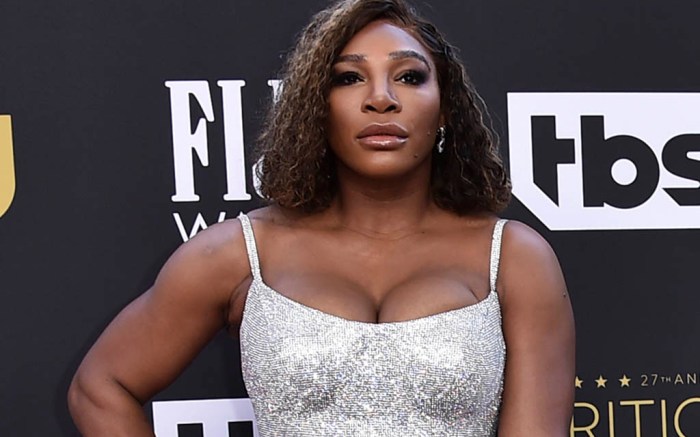 World-class athlete, entrepreneur, producer — those are just a few of the many titles that Serena Williams holds. As seen today on the red carpet at the 2022 Critics Choice Awards in LA, you can also include style icon. Williams is known for her fashionable looks, both on the court and on the red carpet.

The look was further styled with an elegant smokey eye, a nude lip and several diamond bracelets.

Williams attended the event alongside sister, fellow tennis-star and fashion-lover Venus Williams. Venus complemented Serena’s ensemble by wearing a sensation silver outfit herself. Aside from having a similar color palette, there was little the sisters’ outfits had in common with one another.

Venus wore a combo with a jumpsuit and a dress that featured a halter-top neck line and high slits to show off the silver platform, ankle-strap heels. Overall, the sisters made for a stunningly silver duo.

Liker her tennis career, Serena holds a deep and ongoing love for style and fashion. Serena is a Nike ambassador and has created her own Air Force 1 sneaker. She has also worked with Stuart Weitzman to create her own curated selection of SW stables. She is also an entrepreneur with her own clothing line, S by Serena, and her own jewelry line, Serena Williams Jewelry. Whether she’s running errands or walking down the red carpet, she’s always ready to serve a look.

The Critics’ Choice Awards honor the year’s top pictures and performances of film and television. This year’s event, hosted by Taye Diggs and Nicole Byer, will be broadcast from the Fairmont Century Plaza Hotel in Los Angeles. Leading the film categories are “West Side Story” and “Belfast,” while the TV side is led by “Succession.” The Critics Choice acting categories are led by stars from most nominated projects, including Lady Gaga, Kristen Stewart, Will Smith, Ariana DeBose, Kirsten Dunst and Andrew Garfield.

See more of Serena’s style through the years.