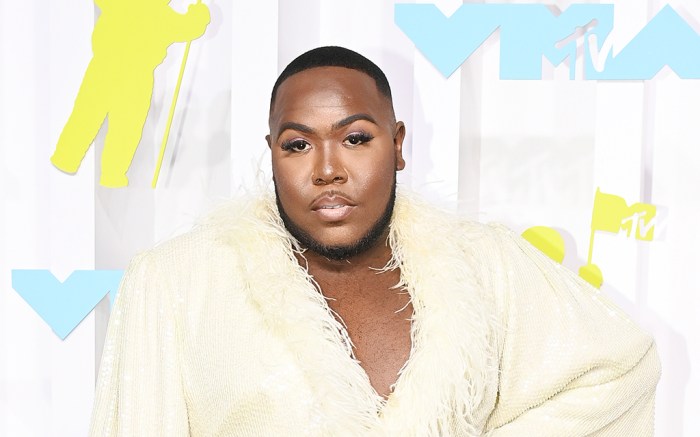 Saucy Santana arrived to the 2022 MTV VMAs donned in a dreamy wrap dress on Sunday in New Jersey. The “Material Girl” rapper made his red carpet debut at the awards a memorable one.

Fitted with faux-feather trim, the social media personality dressed in a maxi cream gown made for luxurious lounging, the dress lined with hot pink fabric.

The garment was gathered and wrapped to one side and featured a risky side slit and bell sleeves. Santana wore little to no visible accessories, letting the whimsical piece speak for itself. Beyond accessories, he did his face in warm brown hues with a nude lip to finish.

The 28-year-old finished off his look strong, stepping into white square-toed sandal heels. Every strap on the shoes was dotted with large pearls that offered the simple silhouette an interesting addition. While the style is slightly understated, the geometric shape, as well as the adornments, make the heel a subdued winner.

The entertainer has come a long way from doing the hip-hop duo City Girls makeup. Santana’s notability has skyrocketed thanks to his viral fame on TikTok. Since the release of his Feb. 29, 2019 single “Walk Em Like a Dog”, the performer has become a recognizable name, especially with Gen Z and Millennial.

PHOTOS: See what other celebrities wore on the red carpet at the 2022 MTV VMAs.